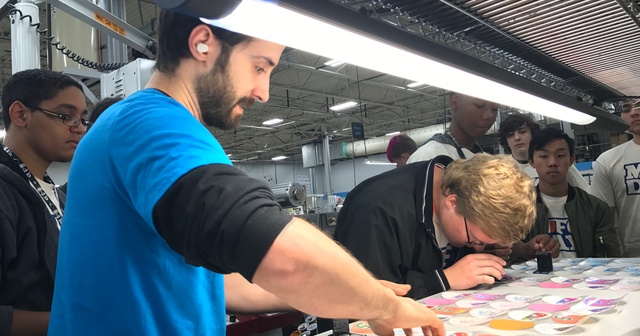 A new legislative proposal could let officials at certain school districts use greater discretion to devise creative strategies for their students rather than wait for permission from state bureaucrats.

House bills 6314 and 6315, sponsored by Rep. Tim Kelly, R-Saginaw Township, would create the legal framework for a “public innovation district.” Any school district could apply to the state superintendent to obtain this status. The designation, good for five years at a time, would give district leaders more freedom to operate year-round or outside the traditional school setting and craft different ways to measure student learning. To get this freedom now, districts typically have to wait for the Michigan Department of Education to approve a waiver request.

"Over the years, I've seen where waiver after waiver, year and year, is requested of the Department of Ed and I'm tired of seeing districts have to go through this mother-may-I process every year," Kelly said at the Sept. 6 committee meeting, according to MIRS News. Kelly is the chair of the House Education Reform Committee.

Kelly's bills draw on the experience of over 15 Michigan school districts that make up a growing and informal network of self-described early adopters of nontraditional learning models. The network, Michigan CoOp, gives these districts opportunities to interact and learn from one another.

Two CoOp districts are located nearly adjacent to one another just north of Detroit's city limits: Madison and Center Line. Both districts have strong partnerships with the unique charter schools they authorize. But their forward-thinking approaches to education go further than that, developing some unconventional programs.

Superintendent Eve Kaltz has worked to lead major changes at Center Line Public Schools from within. She and her immediate family are all Center Line graduates, and she previously served as a teacher and principal in the district. Her tenure as superintendent started in 2009, but her pursuit of creative programming began some years later.

Kaltz asked a high school senior who had come from a difficult background and had received great care and attention from staff what he would do after graduation. His initial silence was followed by this striking observation: “You and I both know that if you don't go to college, you’re nothing.”

She was grieved to hear that high school hadn't prepared him for the workforce and described it as the lowest moment of her career. But instead of wallowing in despair or shrugging it off, she worked with her staff to transform Center Line High School into wall-to-wall career academies. While the school has maintained Advanced Placement and fine arts offerings, it developed career academies that encourage students to explore fields from digital design and communication to law enforcement. The district has taken seriously the input of businesses and other potential future employers.

Another innovation Kaltz has helped Center Line develop came as the result of a conversation she once had as an elementary principal. A homeschool mom came forward with an idea about setting up an afterschool program for the whole community. “She was never ever negative about the public schools," Kaltz said. “I thought there were things we could learn from the homeschool families and take them to the public schools, and vice versa.”

Today, years later, Center Line and Madison both operate homeschool partnerships, in which districts receive state funding to provide part-time elective courses to students who are educated primarily at home. High demand has led most Michigan CoOp districts to start such programs.

Madison started its partnership five years ago, following the lead of districts like Oxford and Berrien Springs. Randy Speck left a career in nonpublic education to take the helm at Madison in 2012. The district had gone through many superintendents in previous years and struggled with deficits and employee unrest. Once Speck helped the district become more stable, he looked for the district to chart a new path.

Madison was one of the first districts to participate in the inter-district Schools of Choice program in the 1990s. But Speck looked beyond that pool of students for opportunities to meet the needs of young people and families that other districts were neglecting. As a leader, he embraces the educational equivalent of a "Blue Ocean strategy," looking to serve families with options most of his competitors have not seriously considered.

Perhaps the most remarkable breakthrough Speck has helped to pioneer is the Michigan Advanced Manufacturing Collaboration. An extra 10,000 square feet of school facility space and visionary board leadership enabled Madison to set up a program similar to one that started a few years earlier in Ohio. During the day, the district's students can learn through applying high-tech manufacturing skills and work to earn robotics and machining certifications, which can lead to healthy job prospects for graduates. When school is not in session, the facility is open for area shops to train their own workforces.

Speck believes that Kelly's bills will make it easier for districts like his to implement programs that don't necessarily fit the standard schooling model. However, he doubts that many other districts will eagerly join them. "Sometimes school districts will run to the trough quickly if there's money out there," Speck said. "I will be interested to see how many school districts actually apply for innovative school designation if there's no money attached to it."

Further, it requires a lot of hard work and careful planning to create these programs, like Center Line's Academy21 Hybrid School for youths whose challenging circumstances have caused them to struggle in a mainstream learning environment.

Kaltz would welcome the extra flexibility proposed in the legislation. She and her leadership team continue to look for opportunities to try something new: “I always say we're going to find a place and program for every student, even if it means one student that has really unique needs.”