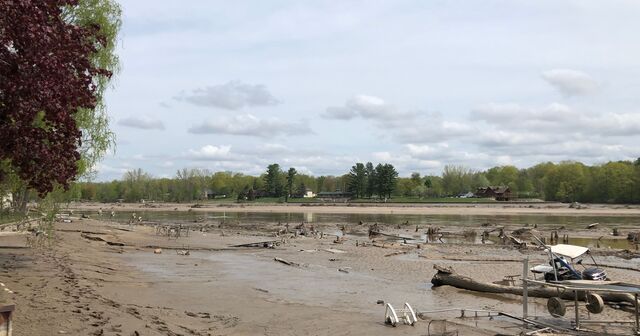 How a Mid-Michigan Dam Failed

(This post is a highly abridged version of a more in-depth report on the events that led to the failure of the Edenville Dam. Watch the Mackinac Center website for more details on this soon-to-be-published report.)

An extended struggle between government regulators and executives at Boyce Hydro, the owner of the Edenville Dam in Midland County, likely contributed to extensive flooding in Mid-Michigan. Today the evidence appears to show that both the dam’s owner and the state agency charged with regulating the dam set the conditions that allowed a recent flood to push it to rupture.

Built in 1924, the Edenville Dam is made up of an earthen embankment, concrete spillways (to control water levels), and a hydroelectric generation facility. The Four Lakes Task Force, a community effort to address the need for upgrades and ongoing maintenance of several dams, had an agreement earlier this year to purchase the Edenville dam and three others from Boyce Hydro.

Special assessments paid by area residents would be paired with support from Midland and Gladwin counties to fund dam maintenance and repair. The agreement was hailed by the task force as “an important step forward in bringing control of the lake levels and dams to the communities.” But, after the May 19 flood, the task force said it was “reassessing the path forward to acquire the Boyce property and rebuild our dams and lakes.”

The Edenville Dam has survived heavier rains in the past. But on May 19, rising water levels in the Tittabawassee River and Wixom Lake scoured out a section of the dam, which then washed downriver and over the Sanford Dam. Water inundated Edenville and Sanford and flooded low-lying portions of Midland, finally cresting at the highest level ever recorded there, 35.05 feet.

Flooding ruined the homes and lives of many area residents and forced 11,000 people to evacuate, though thankfully, there were no deaths or injuries reported as a result of the flood. But now, people are asking why the dam failed. The recent history of the 96-year-old structure offers some answers.

In February 2018, the Federal Energy Regulatory Commission cited a “long history of non-compliance” with federal regulations and inadequate spillway capacity as key reasons for revoking Boyce Hydro’s license to operate the Edenville Dam hydroelectric project. Boyce Hydro lacked the funds to make required upgrades. It attempted to pass on to area residents a portion of the $8 million price tag for bringing the dam into compliance with federal regulations but failed.

After the dam lost its federal license, jurisdiction shifted to the Michigan Department of Environment, Great Lakes, and Energy. The department completed an initial inspection in October 2018 that noted “moderate deterioration” of the spillways, but reported “no observed deficiencies that would be expected to cause immediate failure of the dam.”

After the dam failed, however, the department said it had “strong concerns” about the dam’s spillway capacity in 2018, when it assumed jurisdiction. Officials also reported they were waiting on a nearly completed structural assessment. But the 2018 inspection report did not mention inadequate spillway capacity, nor did it recommend further assessments or repairs.

Throughout the discussion about spillway capacity, Boyce Hydro had consistently pushed to lower the water levels in Wixom Lake, the lake created by the dam. Although drawdowns raised the ire of local residents, the company maintained that lower water levels in the lake formed “a safety buffer for flood water discharge” and were essential to maintain the dam’s structural integrity.

Boyce Hydro’s lawyers claim that, since they assumed jurisdiction, Michigan regulators have been “exclusively focused on environmental issues,” primarily water levels and their potential impacts on the endangered snuffbox mussel. The company points to an April 30, 2020, lawsuit filed by Michigan Attorney General Dana Nessel, EGLE, and the Michigan Department of Natural Resources. The suit claims Boyce Hydro “dramatically lowered the level of Wixom Lake for an extended period in both 2018 and 2019 …, causing the death of thousands if not millions of freshwater mussels, many of which are federally endangered.”

That focus on mussels led Boyce Hydro spokesman Lee Mueller to boldly state after the flood that regulators “clearly care more about mussels living in the impoundment than they do about the people living downstream of the dam.” But EGLE spokesperson Nick Assendelft pushed back against Mueller’s claims in a May 22 email, arguing that “EGLE directed Boyce to follow the court-ordered lake level requirements.”

Assendelft also reiterated a claim that the company had a “troubling track record of noncompliance and neglect.” He argued, “Boyce’s assertion that its illegal emptying of Lake Wixom — to the detriment of property owners and the environment — was motivated by concern for the safety of local residents is false.”

Boyce Hydro claims it acted quickly on May 15, ahead of the storm, to once again begin drawing down lake levels. But clearly, it was unable to draw water levels down sufficiently to hold the flood waters back. Now, in the immediate aftermath of the breach of the Edenville Dam, numerous lawsuits have been filed against both Boyce Hydro and the state’s environmental department, and demands for an independent investigation are mounting. Gov. Gretchen Whitmer has called for EGLE to lead that investigation, a suggestion that has been widely panned as wholly unrealistic, given its direct involvement in the dam’s management.