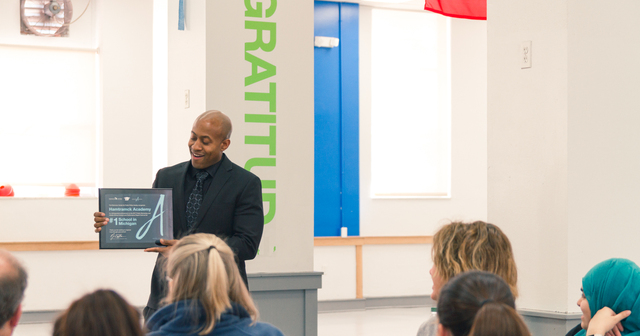 The brick structure on Conant Street may not stand out to passersby, but the school that operates inside has earned a major distinction. No elementary or middle school in Michigan is outperforming Hamtramck Academy.

Opened in 2004, the National Heritage Academy charter school near the heart of Detroit finished as the highest-rated school on the Mackinac Center's newest Elementary and Middle School Context and Performance Report Card. The report card's unique "CAP" (Context and Performance) Scores factor three years of performance on M-STEP tests, adjusted to account for the share of students eligible for free lunch subsidies based on their household income. A strong statistical connection exists between student poverty and low academic achievement, because of the disadvantages and challenges typically faced by low-income students.

"Our goal has always been to be one of the best schools in Michigan, so we're excited about this report card and recognition," said Principal Alvin Ward (pictured above, holding the recognition plaque). "It really dispels the myth that students that come from humble beginnings can't be high achievers."

This edition of the CAP Report Card also ranks schools for long-term performance over eight years of measured data and also ranks them based on improvements made over that time. Hamtramck Academy was one of only two schools to make the top 15 on all three lists. (Maples Elementary in Dearborn was the other.)

Though Hamtramck Academy's student poverty rate is more than twice the state average, last year the school topped the state average in math for all six-grade levels and on every other test in grades six through eight. The charter school similarly beat expectations in the previous two years.

Hamtramck Academy isn't the only NHA school to excel in helping students learn math. A new University of Michigan study found that a year in one of the state's NHA schools translates to significantly higher math scores. Achievement gains in reading are less clear.

The study also explored practices in NHA schools to see what they do differently from their competitors that might explain the positive results. Notably, these include more time spent on math instructions, grouping students by ability in core academic subjects, regular testing to measure student progress and frequent classroom observations to support teachers in their improvement. As charter schools that don't serve as a default option for any students, they place a premium on engaging with parents.

Hamtramck Academy routinely receives more applicants than there is space available. According to school leaders, it is especially attractive to families where English isn't the primary language. "That's one thing that brings parents to our school is knowing that their students are going to get that extra education to catch up that gap," said Korryn Wilkins, the school's third-to-fifth grade dean. Ethnic diversity is evident in the student body, with immigrant families widely represented.

"Staff is held to a high standard, and they in turn hold students to a high standard. We are all just working to the goal of having kids be career and college-ready," added K-2 dean Monique Cash. Robust data informs the school's commitment to intervene with students individually or in small groups to help them overcome identified gaps in their learning.

The connections between students and teachers give life to the culture of high expectations that permeates the school. Principal Ward said that there is a great deal of stability among the staff, including no turnover between the 2017 and 2018 school years.

While Hamtramck Academy excelled on the recent Mackinac Center report card, the network of charter schools also rated highly as a whole. Forty of 46 NHA schools beat the odds of poverty with CAP Scores each topping 100.

But even at the top, there is no sense of having reached the summit of success. Principal Ward said Hamtramck Academy needs to strive to become more visible and accessible in the community, and that earning the top school status in Michigan isn't enough.

"I would love to be the best school in the country," he said.