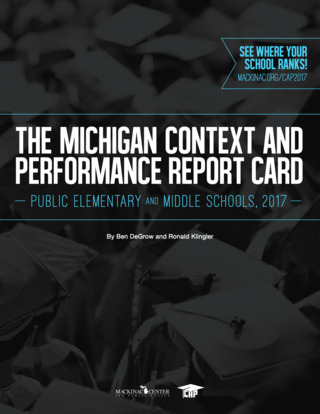 Click here for an online, searchable database of all the school rankings.

Click here for a PDF of the full study.

This report represents the third in a series designed to measure the academic performance of Michigan elementary and middle schools, and the first of the series to use results from the M-STEP assessment. Similar report cards were published in 2013 and 2015, based on different but overlapping years of scores on the defunct Michigan Educational Assessment Program.

The Context and Performance Report Card stands apart from standard measures of academic performance. It controls for the differences in students’ socioeconomic status at each school. This provides a more accurate appraisal of a school’s performance, since higher rates of student poverty are strongly correlated with lower academic subject test scores. Without this needed adjustment, school report cards could overrate the effectiveness of schools with relatively affluent student populations or underrate the effectiveness of schools with less affluent students.

As with prior editions, the report card uses multiple years of student achievement data so as not to allow one year’s results to unduly influence a school’s ratings. In this case, three years of M-STEP data for third through eighth grade subject tests are incorporated into determining a school’s CAP Score.