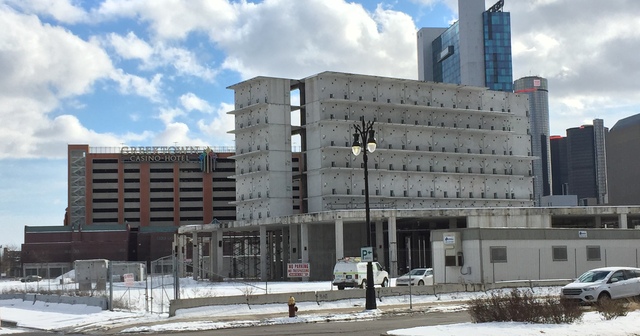 Detroit’s Soccer Stadium Should Stand on its Own

Stadiums are a bad investment for taxpayers

Wayne County Executive Warren Evans has issued an ultimatum to the people who propose to build a professional soccer complex in exchange for the “Fail Jail” site in downtown Detroit. Evans said that the project must not cost taxpayers any more than simply finishing the jail as originally planned would. That’s simply not good enough.

While Evans’ defense of his constituents’ interests is laudable, he and the Wayne County Commission should go further. They should prohibit any and all subsidies, incentives, tax breaks or other public funding for the proposed stadium project. Public subsidies of professional sports stadiums don’t benefit local residents, and this plan already calls for enough additional sacrifice by the people of Wayne County. Residents should not have to pay for any other public investment in a privately owned, billion-dollar project.

The proposal is tied up with the construction of a new county jail annex, which was stopped after estimates of its cost ballooned, through mismanagement and alleged corruption, from an initial $220 million to $391 million or more. The Wayne County Commission approved $300 million in bonds for the project, and an astonishing $151 million has already been spent, with little to show for it.

Last April, NBA team owners and business owners Dan Gilbert and Tom Gores announced plans to apply for a Major League Soccer expansion team in Detroit. Gilbert and Gores identified the jail site and surrounding court complex as their preferred location for the team’s stadium and associated mixed-use residential and commercial developments. Their representatives made statements about building the county a new jail and courts elsewhere in return for the Gratiot property, but they have not presented a formal proposal to accomplish this swap.

Evans has visibly had enough of this state of affairs and has set deadlines for restarting the construction process. Speaking at the Detroit Economic Club in mid-January, he identified finishing the jail as his top priority for 2017 and set a deadline to resume the construction process. He has said publicly many times that any deal to transfer ownership of the Gratiot site must include a new jail being built at no extra cost to the public beyond what finishing the existing, partially built jail would incur.

Evans’ line in the fiscal sand was the first piece of good news to come out of the fail jail debacle in years. But he and the members of the Wayne County Commission could make even more good news by taking a principled stand on behalf of their constituents and extend this protection of local taxpayers by banning any form of public funding for the proposed soccer complex.

As we noted when Gores announced the Pistons’ move to Little Caesars Arena in downtown Detroit and the Detroit Downtown Development Authority pledged $34.5 million to assist in the move, sports facilities are not “transformational” or “catalyst” developments. Nor do they improve the business climate in a city. A hot dog or beer purchased in a stadium or nearby bar isn’t a new economic impact. It’s simply a hot dog or beer that is not being sold by an existing restaurant in different part of the city.

The economic impact of a soccer stadium would be even more limited than most projects, as open-air stadiums in the upper Midwest sit empty much of the year. Nearby Comerica Park is largely silent from November to April, driving no traffic to local businesses. It’s also worthwhile to note that the closest MLS team to Detroit, the Columbus Crew, were only active in their stadium between May and October of 2016, playing just 19 games.

There’s also a cost to local businesses to moving the entire court and jail complex. Many local law firms and attorneys, as well as bail bondsmen and others, have offices within walking distance of the existing court and jail complex. Moving everything miles away will force them either to uproot or suffer the inconvenience of extra travel. They shouldn’t have to subsidize a development that will already be forcing them to incur additional costs.

These are not simply the observations of two frugal, taxpayer-friendly soccer fans. Research by academics shows that on balance, professional sports teams and stadiums do not create jobs and wealth.