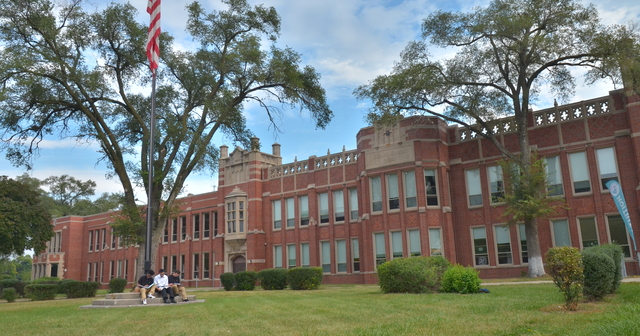 Quietly but effectively, Frontier International Academy has stood out in making a positive impact on the newer, less privileged American high schoolers who have enrolled there.

Mackinac's report uniquely adjusts multiple years of state test results based on the level of student poverty in a school. Nearly every single student at Frontier, a public charter school authorized by Bay Mills Community College, is deemed low-income.

Frontier International Academy occupies an old but stately facility that formerly housed Cleveland Middle School building, closed down by the Detroit school district in 2010. The school's management company, Global Educational Excellence, invested in overhauling a structure that was in a bad state of disrepair. Today, more work is being done to make fuller use of the space, converting one wing to serve additional students in grades K-5 next year.

Most of the students served are first-generation immigrants, many from regions in south Asia. In all, 65 percent of the high school's 500-plus students come from homes where English is not spoken as the primary language. The school takes in some learners from higher-performing charter schools like Bridge Academy West and Hamtramck Academy, along with peers from other area schools who tend to need more help. Some students arrive well behind grade level.

"A lot of kids don't have any parents helping them with school work," said high school Principal Dr. Adnan Aabed. "Their parents are working, sometimes in long shifts." The school provides double doses of English and math instruction to students who come in the furthest behind. Some may even take an extra weekly 2-hour ESL class.

Given the challenges, Aabed is proud of his school's 93 percent attendance rate. By the time students reach their final year at Frontier, showing up for class extends beyond campus for part of the day. More than 60 students this year are dual-enrolled at area community colleges.

Aabed says many parents, especially those with daughters, choose his school out of safety concerns. The data reflect the trend: Last school year, 55 percent of Frontier students were female. Another factor that makes the school popular for families is its highly regarded Arabic language program, which blends material on American history and culture into the curriculum. Even so, appreciation of different cultures represented on campus stands as a core value.

Nearly every student at Frontier ends up earning a diploma. Not all of its graduates go on to higher education, in some cases due to cultural expectations. But school leaders employ various programs to help make sure all students have the skills and confidence to take the next step up. That includes the availability of three Advanced Placement courses, growing to five in 2019-20.

"I have had the experience of working with students who came to school as a 9th grader who didn’t understand English, not familiar with American culture, then saw them graduate four years later ready for the challenge of college," said Debrah Davidson, a veteran teacher who also chairs the School Improvement Team. "They are living proof we make a difference."

A caring, effective and stable teaching workforce is a key ingredient of success. It takes a higher starting salary to bring them in, but Aabed noted that more than 95 percent of Frontier's faculty return from year to year.

A sense of mission and accomplishment is instrumental in keeping many of the charter school's educators on board. As Davidson said, "We open doors of opportunity for generations to come."