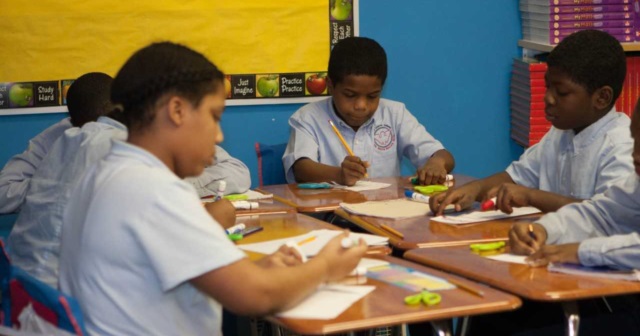 Presidential election season must be heading into full swing. Left-leaning activists are crafting messages to persuade fellow Democrats about how to perceive certain issues in choosing a candidate. Education is no exception.

In a recent example, podcaster Jennifer Berkshire recently tried to downplay racial divisions within the Democratic Party over charter schools. Her Dec. 30 column for The Nation frames the issue as “liberals vs. moderates,” which misses both the plight of real students and families and the broad support for educational options from minorities.

On previous occasions Berkshire has assailed public school choice in Michigan, ignoring parent motivations for exercising choice, exaggerating its effects on districts that lose students and misstating the facts on funding levels. She follows a similar tack in her latest piece, alleging that “voter backlash against GOP spending cuts to school spending” played an important role in flipping our swing state governor’s mansion to the Democrats in 2018. In fact, this issue wasn’t at all pivotal to the gubernatorial campaign here, in no small part because K-12 funding steadily and consistently grew during the Republican Snyder administration with bipartisan budgets.

Regarding the Democratic divide over charters, Berkshire blames it on “politics and ideology.” With President Obama — himself a notable charter school supporter — gone from the spotlight, Democrats have cast Michigan’s own Betsy DeVos as an education villain as motivation to defeat President Trump. More precisely, then, “politics and ideology” best explains white Democrats’ declining attitudes toward charters, but not the consistent, resilient support among the party’s black and Hispanic voters.

Berkshire acknowledges recent public opinion surveys that show a clear racial gap among Democrats. Yet she also sets up “centrist Dems and Wall Streeters” as the party’s chief villain continuing to stand up for charters, declaring them “the loudest opponents of the party’s left-wing tilt.”

The loudest and most outspoken response to Left-leaning presidential candidates attacking charters, though, have come from low-income members of the African-American community. Sarah Carpenter of Memphis has seen firsthand how a local KIPP charter school enabled one of her 15 grandchildren to become the first in four generations of the family to graduate college. “I want better for my grandchildren, I want better for the kids in my community,” she said in an interview.

Carpenter helped to spearhead the Powerful Parent Network, which directly confronted Elizabeth Warren at a Georgia campaign event but was visibly shut out of a teacher union-sponsored “Public Education Forum” in Pittsburgh. The grassroots army appears to be far from done. Though one of the largest and most visible, it’s not an isolated effort. Locally, parents from Detroit Voice for School Choice rallied last year to protest Gov. Whitmer’s veto that unfairly targeted funding for charter schools .

Still, Berkshire seeks to allay Progressive fears by saying the racial polling gap hasn’t really manifested itself at the ballot box. It is hard to predict with confidence how these grassroots frustrations will play out in the current Democratic presidential saga.

But the voting bloc of minority parents already proved themselves consequential in the 2018 election, likely providing the winning margin for Republican Ron DeSantis in a tight race for governor of Florida. Andrew Gillum, the African-American Democrat running for governor, campaigned against a program that gives 100,000 low-income students access to private schools of their choice, through scholarships funded by corporate tax credits. Black women were twice as likely to vote for DeSantis as for the Republican candidate for U.S. Senate. Many likely feared losing vital access to educational opportunities for their children.

While Berkshire rails even more against “vouchers” as a more dangerous Republican alternative to charters, it turns out that minority support is even stronger for private school choice programs like Florida has than it is for charters. According to the 2019 Education Next national poll, about two-thirds of black and Hispanic voters back scholarship tax credits, with the rest split between neutral and opposed. A 2018 Mackinac Center voter survey found nearly similar margins of strong support in Michigan.

Regardless of how much impact these opinions have on the presidential race unfolding this year, it ought to seriously concern Progressive opponents of educational choice in the decade to come.