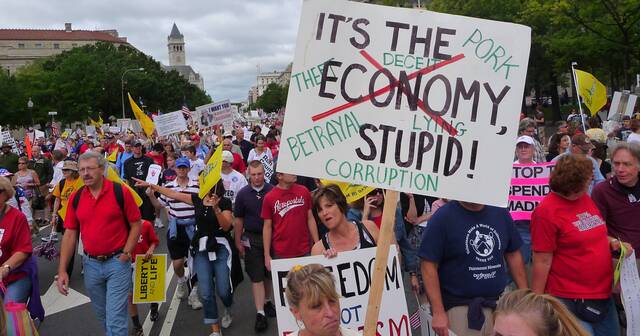 James Carville's 1992 slogan 'It's the economy, stupid' was still in use at a September 2009 demonstration; dalelanham / Creative Commons
Fiscal
Blog

“What is a recession?” the White House tweeted this week. The Biden administration provided an answer to its own question, but the answer did not include the most widely used definition of a recession: two consecutive quarters of inflation-adjusted (or “real”) negative Gross Domestic Product growth.

There’s probably a good political reason for the White House to do this. A report released Thursday from the Bureau of Economic Analysis showed a second consecutive quarter of negative GDP growth. President Biden’s opponents would practically be committing public relations malpractice by not adding a “recession” label to the current administration. It is politically profitable to do so and the political class knows it.

President George W. Bush avoided using the “r” word back in 2008 for that very reason. His father presided over a recession that may have cost him re-election. At a minimum, his re-election campaign was frustrated by the Clinton campaign’s, “It’s the economy, stupid” slogan. Voters often vote with their wallets, and a recession is a grievous threat to their finances and well-being. The party in power when a recession arrives often bears the brunt of voter fear and frustration.

The good news for the White House is that it may have some ground to stand on. The National Bureau of Economic Research is the agency charged with calling recession starts and ends. From its web site: “The NBER's definition emphasizes that a recession involves a significant decline in economic activity that is spread across the economy and lasts more than a few months. In our interpretation of this definition, we treat the three criteria—depth, diffusion, and duration—as somewhat interchangeable.”

The bad news for the public and policymakers is that it takes the NBER time to make its announcement. For instance, it announced the so-called Great Recession in December 2008, saying that the economy had been in recession since December 2007. It took a year to announce that the economy was in a recession. The bureau announced in November 2001 that the economy had been in recession since March of that year. It later found that economy had been recovering by the time it made the announcement. In other words, NBER is good for official records, but it doesn’t offer much of a warning to policymakers and the public. That’s why the two quarters of negative growth remains a reliable warning. Elected and appointed officials should all take heed.

If the economy slows or falls into a painful recession, they may need to make difficult choices over what public service to provide and how much. That is why officials should be making difficult choices now, shoring up rainy day funds, discarding unnecessary functions or looking to contract out for less expensive services now provided by government.

I’ve issued what turned out to be a sage warning before. In 1999 I wrote an open letter to local officials offering them similar advice. “The time to privatize is when the good times roll. That time is now,” I wrote. At that time our unemployment rate was 4.0%. Today it is 4.3%. Less than a year later the stock market had peaked and by March of 2001 the nation was in a recession.

Whatever numbers come out of Washington D.C. this week, pursuing good policy should always be a goal. That means spending restraint. It means paying down debts. It means saving for a rainy day before storm clouds once again gather on our horizons. The state of Michigan’s latest state budget does this. The federal government and many local units of government should take note.