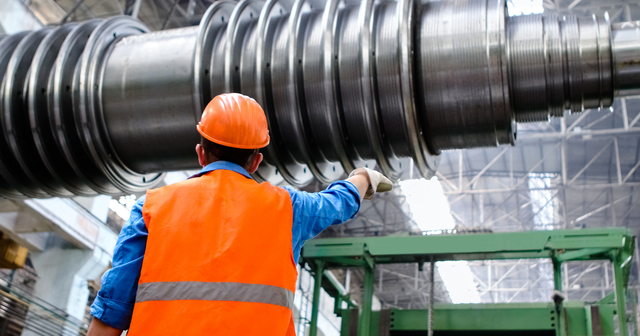 Michigan has lost half its auto jobs since the beginning of this century. But it has not lost anything close to half its overall total jobs. This is because the state economy is much more complex than its reputation.

Auto manufacturing has not been a great industry for job growth. Michigan has a declining share of a diminishing market. The state’s share of the auto industry is down, as is its total number of auto jobs. Michigan had 27% of the nation’s auto and auto parts manufacturing jobs in 1990. Today that share is 18%. The peak number of auto jobs in Michigan did not come in a mythical post-war golden age some old timers may be thinking of. The peak occurred in 2000. 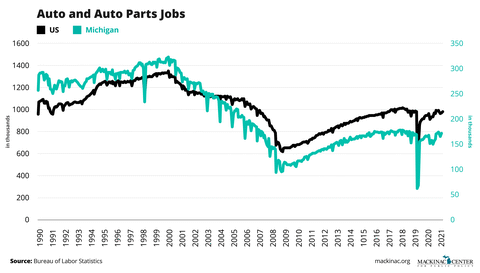 The total number of auto jobs in the United States also peaked in 2000. Michigan’s endured a slightly worse jobs trend than the nation as a whole, but the national and state jobs trends closely track each other. The jobs didn’t move out to some other state; the numbers all rose and fell together.

Michigan remains the heaviest auto manufacturing state. The state produces $30.8 billion in auto equipment. The next closest state is Indiana at $16.6 billion. The auto industry as a whole is producing more product, but it is employing fewer workers.

Where, then, are all of the jobs in Michigan?

The sector that employs the most people isn’t even manufacturing. It’s the large professional and business service category that covers a lot of things. Engineering firms, lawyers, accountants, and advertisers are included in that industry. Another 72,000 people work in company headquarters operations and whatever else is included in “management of companies and enterprises.” Some 53,000 janitors and others work in the category labeled “services to buildings and dwellings.”

There are a lot more people working in health care now. Health fields employ 577,100, and the jobs in these fields have steadily grown over time — 29% since 2000.

There are more people who work in banks and other financial institutions in Michigan than work making auto and auto parts. Jobs in the sector are up 13% since 2000.

That’s just employment. The value of production — all of the goods sold and services rendered by people in the state — shows that Michigan does a lot more than build vehicles and parts. The finance industry produces 2.5 times more workers than the auto manufacturing industry. And it ought to be unsurprising to see that healthcare industries produce more, too.

People look for short cuts to understand what drives a state economy. Washington, D.C. is government. New York is finance. California is movies. Nevada is gambling. The idea that Michigan rides the fate of the domestic auto industry is an easy shorthand. Except it doesn’t explain a lot. To repeat: The state has half the auto jobs it had in 2000, but it doesn’t have half the jobs.

What replaced the lost auto jobs? A lot of different things. There are millions of people in Michigan, and if the Great Lakes State were its own country, its production would make it the world’s 34th largest country. People shouldn’t expect a simple answer.

The auto industry is very important. Many people rely on it, and Michigan continues to lead the 50 states in auto manufacturing. Still, we ought to recognize that our state builds a lot more than cars and trucks.

Policy gets shaped by what people think. Lawmakers give private companies billions because people confuse headlines with economic data. The auto industry gets preferences in state policy because enough people think it drives state prosperity. If we change that understanding, policy will follow. So give everything else in the state some credit.