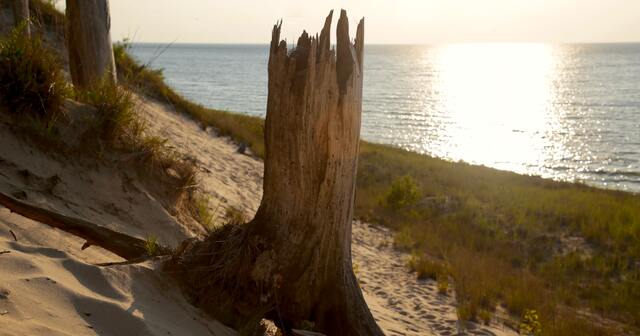 In a recent announcement that the state had approved a $250,000 payment toward a company’s expansion, Gov. Gretchen Whitmer pledged that she would “continue building up Michigan's economy and usher in a new era of prosperity together."

When Gov. Rick Snyder approved a business subsidy program, he promised that he would “do everything we can to remain the most competitive state for business and show the rest of the nation and the world that Michigan is the best place to create new jobs.”

Or consider Gov. Jennifer Granholm’s boast about her program to subsidize job creation. “In five years, you're going to be blown away by the strength and diversity of Michigan's transformed economy." (Five years after saying this, Michigan had lost 275,500 jobs, a 6.4% decline.)

There is a basic disconnect between the policies lawmakers want and the outcomes they say they produce. Politicians tout subsidies to select businesses as a way to add jobs. And this strategy just doesn’t work. They can produce job announcements at taxpayer cost, and job announcements aren’t jobs.

In fact, it’s worse than that. While it might sound impossible, headlines about business projects are completely unrelated to whether a state grows its workforce or not. You’d think that, all things being equal, a company announcing that it was going to locate or expand in a state would boost employment there. But it doesn’t work out that way in the real world.

This can be seen in the data that gets used to announce the Governor’s Cup, which Site Selection magazine hands out to the state that has the most headline-worthy business projects. The magazine gets data about all of the announcements of business projects around the country. Comparing this data to job growth numbers reveals the weakness of an approach that tries to win the job war through selective business subsidies. States that get a lot of job announcements ought to grow more than states that don’t. Yet the connection between the two doesn’t exist. They’re simply unrelated. Job announcements don’t lead to jobs or lack of jobs. They just don’t matter. 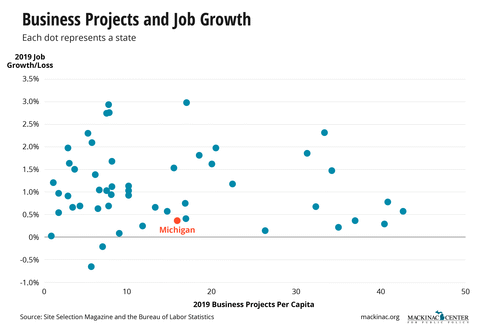 Rearranging the data doesn’t make a difference: Changing the years one looks at doesn’t reveal a connection. Neither does testing whether today’s job announcements affect the following year’s job growth. That’s because no connection exists.

This lack of a link between job announcements and job growth seems weird. It ought to be that when companies announce they are coming to a state or expanding there, it will to affect a state’s job numbers. But there are a lot of companies adding jobs and others that shedding jobs, all without announcing anything in public. This is underappreciated.

In the year before the pandemic, some businesses added jobs while others lost them. Counting up all the gains shows that businesses as a whole added 820,000 jobs in Michigan and counting up all the losses shows that 806,000 jobs disappeared. The difference between the two was the state’s net job growth in the year. Only a fraction of those businesses made the news by announcing they were hiring more people. In other words, headlines are not an indicator of job growth.

Except it doesn’t. The business subsidies that politicians promise will improve the economy can’t deliver on their premise. Boasting about increasing the number of jobs, in other words, resembles bragging about moving grains of sand on the beach as the winds shape dunes.

Lawmakers can do something about growth. They can make the state’s business climate more competitive. They can improve the quality of life for residents. But they’re too often distracted by job announcements to focus on the things that matter.