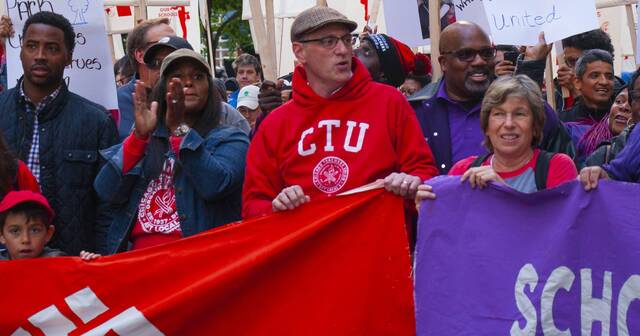 When a teacher pays dues to a union, how is that money used? Probably not as the teacher expects.

Consider a timely news report out of Ohio. Teachers in the state’s Hilliard City Schools recently participated in an initiative backed by the National Education Association’s LGBTQ+ Caucus, which urged faculty to wear badges featuring the words “I’m Here.” The goal, according to the initiative’s website, is for teachers to “Show your students you’re a safe person.”

That’s all well and good. The problem? The flip side of the badge features a QR code linking to explicit content packaged as sex education.

The initiative’s toolkit highlights bondage, domination and sadomasochism, along with sex acts that were once the stuff of gas station bathroom scribbles. It offers step-by-step instructions that most grown adults would blush to read aloud. “It takes time and practice to become a pro,” the document assures its readers. “This information should not only be available,” it notes, “but celebrated.”

Some parents might disagree. So might teachers, who pay dues to the union expecting professional representation, not union-backed pornography. Yet the initiative credits partnership from teachers' unions across the country – from Texas to Kentucky, Iowa to Florida, Delaware to Hawaii.

It’s not the only example of unions going astray.

In early September, news reports broke that the California Teachers Association had conducted opposition research in 2021 on San Diego parents who were advocating to reopen schools. Exposed emails show the union’s researcher searching for details on the “ideological leanings” of frustrated parents.

Twitter posts suggest the union hoped to peg pushback on right-wing political leaders rather than authentically fed-up mothers and fathers. When a left-leaning journalist tweeted that, “The sudden interest in school boards is not an organic grassroots movement of angry parents. It is an effort orchestrated by seasoned right-wing political operatives,” the California Teachers Association’s researcher shared the post, adding a “100” emoji.

Parent groups ultimately sued, and San Diego schools reopened. But now, a year later, public information requests have shone a spotlight on the union’s work behind the scenes at the height of the pandemic. It isn’t a good look.

At the same time teachers were struggling amid unprecedented circumstances, teacher unions were focused on digging up dirt on parents. This was teachers’ money, pulled from the paychecks of hard-working educators with the expectation of representation on issues like pay, benefits and working conditions. Instead, it was used to investigate local parents.

These stories remind us that teachers’ dues money is misused on a regular basis, often with union leaders’ political aims in mind.

The California Teachers Association is an affiliate of the National Education Association, as are many of the partner organizations of “I’m Here” initiative. That means a portion of their members’ dues funnels up to the parent organization. The National Education Association then donates tens of millions of dollars a year to left-leaning political action committees. In fact, in 2020 the union spent twice as much on politics as it did on its members.

Meanwhile, educators who were looking only for representation find themselves unwittingly entrenched in the culture wars. The teachers unions continue to seize upon divisive issues, regardless of whether their members want to follow.

That’s to say nothing of the opportunity costs. Money spent on union politics is money not spent helping teachers and their students.

And let’s be clear: Teachers and students need help right now. Scores on the ACT college admissions exam just hit a 30-year low, underscoring growing concerns about students’ lack of college readiness after pandemic learning disruptions. And just weeks ago, the National Assessment of Educational Progress reported historic declines in reading and math scores for the nation’s fourth graders, an education benchmark. Low-performing students were hit hardest. Educators across the country now face the enormous challenge of accelerating education and getting students back on track.

Unions could focus on getting their members adequate support and resources for the road ahead. But lately that seems low on their agenda.

The irony might lead some teachers to question what exactly they’re paying dues for. The good news? Every public school teacher in the country now has a choice: They are free to continue to give a chunk of their paycheck to the union – or they are freely able to withdraw.

Jarrett Skorup is director of My Pay, My Say, a project of the Mackinac Center for Public Policy that educates public employees about their union rights.

School board races have always been political