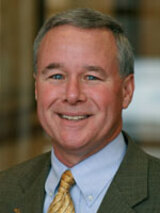 Darryl M. White is a former vice president for advancement for the Mackinac Center for Public Policy. In this role, White led the Center’s fundraising efforts by coordinating relations with individual contributors, organizing events and managing grant requests to foundations and businesses.

White has extensive experience in the management of nonprofit organizations, particularly in efforts to address social needs through the voluntary actions of private citizens. For 12 years, White was executive director of the Voluntary Action Center of Midland County, where he oversaw the recruitment of thousands of volunteers on behalf of nonprofit agencies in the area. White has also been extensively involved in private-sector workforce development: He served first as a consultant to, and later as executive director of, MITECH+ Inc., and he worked for two years as executive director of the Michigan Center for Construction Education and Research, a nonprofit founded by the Saginaw Valley Chapter of Associated Builders and Contractors.

In addition, White served for seven years as executive director of the Pregnancy Resource Center of Mid-Michigan, where he was responsible for fundraising, program development and facility management. Prior to joining the Mackinac Center in January 2010, White was president and founder of a successful, privately held firm that specialized in consulting, training, career counseling and human resources support services.

White holds a master’s degree in public administration from Central Michigan University and a bachelor’s degree in sociology from the University of Wisconsin at Stevens Point. He lives with his wife, Julie, and his two children in Midland, Mich.

Mackinac Center Triple Play: An Update To Our Friends

Mackinac Center Triple Play: An Open Letter To Our Friends