Sandra Hernden is a police officer and mother to a special needs student in the Chippewa Valley School System. During the shift to remote learning, she watched as her son suffered both academically and socially. Sandra decided to start speaking out at school board meetings, urging the board to put aside their political ideologies for the sake of the children. Rather than respond to this feedback in an appropriate manner, the school board president reported Sandra to the Department of Justice. The Mackinac Center Legal Foundation is representing Sandra in her fight to restore her First Amendment rights.

Sandra Hernden is a police officer and mother to a special needs student in the Chippewa Valley School system. During the COVID-driven shift to remote learning in March 2020, Sandra was forced to watch the drastic impact this change had on her son’s academic and social performance.

When the school moved to a hybrid learning model rather than resuming in-person education, Sandra knew she had to take a stand.

She began speaking out at board meetings and emailing board members. She encouraged board members to set aside their political views and take into consideration the effect that their decisions were having on the children in the district.

On December 11, 2020, Elizabeth Pyden, the Secretary of Chippewa Valley Schools, forwarded her email exchanges with Sandra on to her supervisor, stating that this behavior was unbecoming of a police officer. Sandra’s supervisor held an investigation, and determined that Sandra had not violated any departmental rules, and therefore was not disciplined.

Sandra continued to fight for her child. 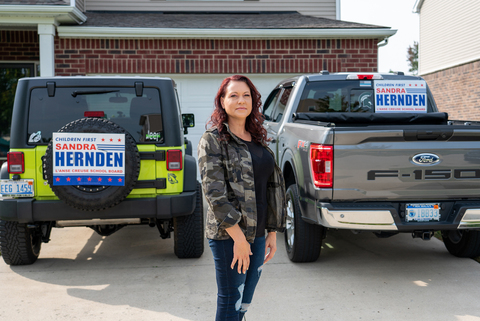 Her attempts to speak at school board meetings were increasingly met with hostility, and she was often interrupted or prevented from speaking. Sandra found a news article about a 6th Circuit Court decision holding that restricting the public’s ability to speak at board meetings was a violation of their First Amendment Rights. Sandra sent the article in an email to the board on October 4, 2021, cautioning the board to take care when interrupting her comments.

The next day, Frank Bednard, President of the Chippewa Valley Schools, told the board that he had referred Sandra to the Department of Justice.

Sandra, like any parent, has only done what is best for her child. Rather than taking her feedback in an appropriate manner, the Chippewa Valley School Board has violated her First Amendment Rights, attacked her character, and attempted to take away her voice.

On September 29, 2022 the Mackinac Center Legal Foundation filed suit against the Chippewa Valley School Board, Frank Bednard and Elizabeth Pyden. Sandra is seeking $1 in damages.