An early charter shows it has staying power 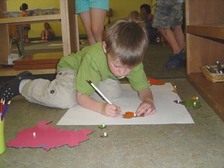 Spreading his work out on the classroom floor, Griffin Peterson traces puzzle pieces to create a map. The youngest students have the largest classrooms because they are still working on large motor skills, the school’s director explained. The Montessori philosophy emphasizes independent, hands-on approaches to learning.

Sheryl Marshall found Walden Green Montessori in the Yellow Pages as she researched schools for her two young children. She applied in 1994, knowing that her family couldn’t afford the then-private school’s tuition.

But in 1995 she received a telephone call from Jean Hicks, the school’s founder. Walden Green had received authorization to operate as one of Michigan’s first charter schools, making it a tuition-free public school academy. Were the Marshalls interested?

"It was like the answered prayer," Marshall said. More than 10 years later, her younger child completed eighth grade at Walden Green this year, the highest grade offered. "We wish that they would go to 12th grade." 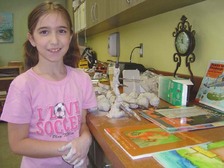 Janelle Clark stands next to a sculpture she created after reading the book “The Giving Tree,” by Shel Silvertein.
More images …

Families choose Walden Green for different reasons, according to Tom Hicks, Jean Hicks’ son and now the school’s director. Jean Hicks continues at the school as a teacher. Like the Marshalls, some parents are familiar with Montessori philosophies and want that atmosphere and approach for their children. Others want a small school. Still others have heard about the school’s high test scores. Walden Green has ranked first among Michigan charter schools for two consecutive years in the Michigan Educational Assessment Program. The school achieved nearly a 90 percent proficiency rate in reading, writing, science and math on the latest tests.

Whatever the reasons, the school’s enrollment has grown from 65 students in its first charter year to 170 this year and an anticipated 196 next year. Hicks expects to reach 220 students the following year, about as many students as will fit comfortably into their new building in Spring Lake, near Grand Haven. The school is authorized by Central Michigan University.

Like its growing enrollment and low student turnover, the new building is a sign of the school’s staying power. Walden Green is financing the facility through a $4.3 million bond issue.

"All our bonds were sold locally," Hicks said. "We had somebody ready to buy them based on the reputation of the school."

Montessori education rests on the work of Dr. Maria Montessori, who lived in Italy in the early 1900s. Her teaching method emphasized children’s ability to teach themselves, given uninterrupted time and a prepared environment.

"It’s choice and ownership in education," Hicks said. "We give kids choices within boundaries."

Children in Montessori classrooms study typical subjects like math, English and science, he explained, but they are given leeway to choose when and, to some extent, how they study each subject. Rather than having all children working on math, in their seats, at the same time every day, a Montessori teacher would more likely present a new math concept to small groups or individuals. The students would then work on those concepts individually, at a time they choose, using materials provided in the room. Instead of everyone moving on to the next subject according to the clock, the Montessori method allows a child uninterrupted time to work on a task.

"You don’t have to sit down at 10 o’clock and do social studies if your mind is on science," said Sandra Kuhn of her four children’s experience at Walden Green. "Montessori teaching methods have grabbed each of them in different ways and taught them."

"It’s a participatory kind of learning," said parent Jolanda Westerhof-Shultz, whose daughter completed third grade this year. Westerhof-Shultz is an associate professor of education at Grand Valley State University, a former middle school teacher and a new school board member at Walden Green. "There’s an emphasis on quality, not just on getting the work done, but also on the handling of the work and tools."

The Montessori environment is different from most conventional classrooms. There are tables and chairs instead of desks, but many younger children choose to work on the floor. The furniture, including cabinets and counters, are child-sized. Hands-on materials are set out by subject throughout the room, so that in one corner, for example, a child may be tracing wooden cutouts of the countries of Africa, and in another corner another child may be identifying geometric shapes.

Generally, the younger the children, the larger the classroom, Hicks said, recognizing that younger children are still developing large motor skills. Each room can cost up to $20,000 to equip, he said.

In addition to working with children individually or in small groups, teachers follow each student’s progress through the child’s written work plan, a list of the tasks that need to be done that day or week, and through weekly assessments. Montessori advocates say this system allows children to learn at their own pace and also fosters love of learning, self-discipline and initiative.

"The Montessori method fits in well with my children’s personalities," Marshall said. "They were able to move around and use tactile materials." Her son disliked math, she said, but he understood that math assignments handed out on Monday had to be completed by Thursday. If he finished his math work plan on time, he got extra gym time on Friday.

In addition to time and environment, the third key component in the Montessori method is the teacher, Hicks said. Walden Green teachers have standard teaching certification through the state of Michigan, but additional training in Montessori methods. Training focuses heavily on children’s developmental stages and their needs at each stage. One of the teacher’s key roles is to link each child with the learning material that matches his or her development and interests.

"It’s all individualized because it follows the child," Westerhof-Shultz said, in contrast to what she called the "egg crate" approach of teaching all children the same thing at the same time.

There are few middle-school Montessori programs and even fewer Montessori high schools, Hicks said, partly because Dr. Montessori primarily worked with younger children and died before developing programs for adolescents. Walden Green uses a theme-based approach with its seventh- and eighth-graders. They study a selected topic for four weeks, are tested during the next week, and then spend "Immersion Week" at a camp on the shores of Lake Michigan where they apply what they’ve learned. That might include putting on a play, conducting science experiments or rock climbing, Hicks said.

Dr. Montessori stressed the importance of practical living skills, so the students also plan and prepare their own meals and help with maintenance and upkeep at the camp. Middle-school students also spend time in community service work, partly because they are at a time in life when they want to know where and how they fit into society, Hicks said.

Walden Green’s new facility sits on nearly five acres of partly wooded land. The building features floor-to-ceiling windows in many spots, some spanning more than one level. A system of ramps, rather than stairs or an elevator, stretches between levels. There is no gymnasium or media center, but there are "common areas" — open areas of space — where children from different classrooms can meet to work. The design takes into consideration Montessori practices, but also the bottom line, Hicks said. "We wanted to build a building that was relatively maintenance free."

Public school academies cannot levy millage to pay for bonds, so the money for the building comes out of the school’s per-pupil state aid allowance. The bond payments are roughly $22,000 a month, Hicks said.

Walden Green is one of a growing number of public school academies who are selling bonds to finance facilities or renovations, according to Thomas Letavis, executive director of the Michigan Public Educational Facilities Authority, within the state Department of Treasury. The Walden Green tax-exempt bonds were issued through MPEFA.

It’s difficult for a start-up charter school to attract investors, Letavis said, but, like Walden Green, more academies today can point to growing enrollment, a waiting list, high MEAP scores and reauthorizations of their original charter. Those items make the bonds more attractive and also bring down the interest rates, he said.

But high MEAP scores are more a byproduct at Walden Green than a goal, several parents said.

"I’m not much of a big fan of standardized testing," Kuhn said. "It’s nice that the scores are high. It gives some minimal form of assurance."

Westerhof-Shultz said one reason she and her husband chose Walden Green was that the school did not emphasize standardized tests.

"For some reason they figured out how to jump through that hoop, but not be controlled by it," she said. As a professor of education, she said she hears reports from student teachers that districts worried about MEAP scores now spend the first month of each new school year reviewing for the tests, an approach she believes fails to foster a child’s curiosity.

Kuhn tracks her children’s progress through their weekly work plans, homework and communication with teachers. Like most parents, Kuhn and Marshall volunteer at the school regularly and see firsthand what happens in the classrooms. Kuhn helps in the special needs program and Marshall is a volunteer art instructor.

"Walden Green is a pretty high parental involvement school," Kuhn said. "It wouldn’t throw anybody off to see a parent walk in."

Walden Green’s objective is to grow, but slowly, Hicks said. Instead of accepting the maximum enrollment possible this year and next, "We talked the bank and the bondholders into saying we’ll grow in steps." One of his challenges is helping families make the transition from a non-Montessori school, he said, and "to open the doors and double enrollment would have cheated the parents already here."