Achieving the theoretical $31 million savings in annual operating spending from school district consolidations in Michigan would require redrawing the borders of the districts colored white in order to produce a series of districts enrolling 2,911 students apiece. The exact head count for each district in the 2005-2006 school year appears in Graphic C2 (see link to table below); rows in gray are districts where the head count exceeded 2,911, while rows in white are districts where the head count was less than 2,911. As a group, districts with fewer than 2,911 students enroll only 30 percent of the total public school population (excluding charter schools), according to the 2005-2006 school year figures shown in Graphic C2. 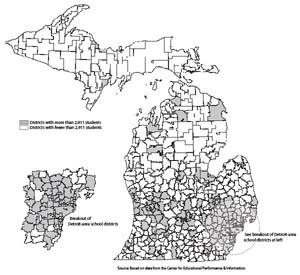 [*] The 2005-2006 school year is the most recent for which school district head count data are available from the state government’s Center for Educational Performance & Information. 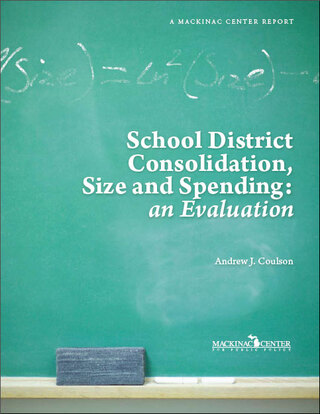