Michigan law requires that local and intermediate districts and charter schools not spend all the money in their funds; in official terminology, the districts and charter schools cannot carry an “operating deficit in a fund.”[384] A district is considered to have incurred a deficit fund balance if the district’s “General Fund balance before reserves is negative” or the district’s “[o]ther funds have negative balances that are greater than the General Fund balance before reserves.”[385] (Note that “reserves” has a specific meaning here, as described below; “reserves” does not refer to money saved for weathering a revenue shortage.) 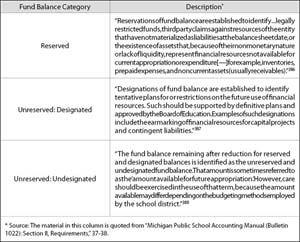 The Michigan School Business Officials organization recommends that districts maintain a fund balance of at least 15 percent of a district’s general fund expenditures.[389] Based on data from Bulletin 1011 for fiscal 2006, the general fund balance after reserves and designations of conventional school districts and charter schools statewide was about 10.8 percent of total current operating expenditures.