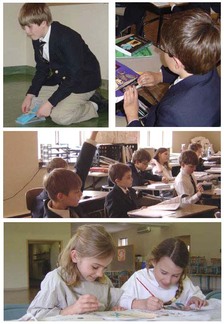 Top: Stephen Sorensen investigates arc and distance as part of a science experiment using model catapults.
Middle: Third- and fourth-graders answer questions about the items they’ll need for a project on electricity and magnets.
Bottom: Art is part of the regular curriculum at Trinitas Classical School. Here, Kate Poortenga and Claire Seven try their hand at watercolors.

Eyes on the teacher, hands at the ready, the young students take a deep breath and begin to chant: "... Action verbs are fun to do. Now, it’s time to name a few. So, clap your hands and join our rhyme; Say those verbs in record time!"

"Faster!" the first- and second-graders beg teacher Susan Mehari minutes later, after completing their repertoire of jingles about verbs, adverbs and adjectives. There is an educational theory behind this chanting, and while that theory might mean little to the enthusiastic students at this point, it means a great deal to the parents who have chosen to send their children here.

Trinitas Classical School is a private, "intentionally ecumenical" Christian school in Grand Rapids. Now in its first year, the school was organized in just over a four-month period by a group of about 10 families who were determined to see their children educated in the classical method and in a joyful and creative environment, according to curriculum committee member Anne Poortenga.

Between late April and August of 2006, the group chose a curriculum, found classroom space in a northeast Grand Rapids church, hired four teachers, including one headmaster, established a Web site, planned the school budget and opened for the year with 95 percent of the needed funding in place. Enrollment stands at 27; tuition is $5,000 per child for first- through eighth-graders and $3,000 for kindergarteners.

"We’ve been blessed with a group of people who are passionate and who are fully involved," said Rob Lough, secretary of the school’s board of trustees. "We need to continue that level of involvement and grow the core group." Next on the parents’ agenda is to find a permanent facility and market the school to more families.

Trinitas is swimming against the stream of Michigan’s private education market. According to figures from the Michigan Department of Education, there were 896 nonpublic schools in the state in 2005-2006, down 17 percent over the past 15 years. The number of students enrolled in nonpublic schools declined by 12 percent during the same time period. Nationally, according to the National Center for Education Statistics, there were nearly 900 fewer private schools in the country in 2003 than in 2001, although the number of private school students as a percent of all students remained steady at 10 percent.

"There’s no question the Michigan economy is hurting every school in the state," said Glen Walstra, executive director of the Michigan Association of Non-Public Schools. MANS advocates and provides services for faith-based schools, including Catholic schools of the seven dioceses of Michigan, the Michigan region of Christian Schools International, and the Michigan District of the Lutheran Church-Missouri Synod Schools.

Many of those systems have closed schools in recent years, consolidating programs in fewer buildings. In the Detroit area alone, 39 Catholic schools have closed since 2002. In some cases the population has shifted to the suburbs, Walstra said, and in other cases parents have moved their children to free charter schools or to other public districts through

"Almost anybody who’s been interested in opening a school in the last 10 years has looked at the charter school route," said Richard C. Halsey, executive director of the Association of Independent Michigan Schools, a diverse group of schools ranging in size, location and educational methods. The number of schools in his association dropped from 30 to 27 recently, due to two closings and one merger. "The schools that have had the most difficulty are ones with the lowest tuition," he said.

Faith-based schools always will have core groups of parents willing to pay tuition for an education that rests on family, school and church, Walstra said. "That’s the three-legged stool, and those families won’t leave unless they’re backed against a wall." But parents may have to take a larger role in marketing their schools, and schools may have to adopt new approaches to the market, he said.

"The schools that are really successful are finding a niche project," he said, like virtual learning or programs for special needs students.

At Trinitas, a significant part of the appeal is classical education, a system of learning based on the Trivium, which is a Latin word for "the three ways." In classical schools, children are guided through three phases of education – the grammar stage, focused on absorbing facts and figures; the logic stage, focused on analyzing that knowledge for truth; and the rhetoric stage, focused on eloquently expressing and seeking out truth on higher levels. Or, as Trinitas school literature describes the stages – "discovering, discerning and desiring truth."

The stages are meant to take advantage of a child’s natural development, headmaster Peter Marth explained. Young children are curious and have a great capacity to take in and recall large amounts of information in all subject areas, particularly with the help of stories, chants and songs. As they grow, students develop the ability for abstract thought, which allows them not just to remember information, but to analyze it, identifying cause and effect in science and comparing and contrasting ideas in such subjects as history and literature. So while younger students might read about the U.S. Constitution and the history surrounding it, he said, fifth-graders would more likely read and analyze the document itself and high-school students would develop and write arguments concerning it.

"Classical education is structured around the natural abilities of the child at every age," Marth said. "We don’t believe that excellence in education is antithetical to a joy-filled school environment."

In addition to typical subjects like math, science, English and history, Trinitas students study Latin and logic, and participate in fine arts and physical education classes. The science program is inquiry-based, meaning there is an emphasis on discovering scientific truths through hands-on activities. Reading selections draw heavily on classical sources, which Marth describes as "works worthy of admiration and imitation from every time and place," from Aesop to Augustine to Beatrix Potter. "We want our children to read well and to be well-read."

Classical schools also teach that there are objective standards of purity, nobility and beauty against which ideas and actions should be measured, Marth said. As graduates, students should be critical thinkers, Poortenga added, having learned that "there are better and worse ways to discuss and dialogue and come to a conclusion."

As an intentionally ecumenical Christian school, Trinitas’ schedule includes daily worship and a Bible curriculum that focuses on commonalities among Catholic, Protestant and Eastern Orthodox Christian beliefs, the leaders said.

The school also partners with home-school parents who want to use classical education curriculum and methods. The school provides lesson plans for some subjects and the home-school students are invited to visit the school twice a week for Latin and other classes, as well as join in extracurricular activities. Right now there are four such partners, but school officials expect the number to grow.

Home-school students are the great unknown in the private school market, according to federal education officials. While the number of institutional private schools and students may be declining, the total number of students educated outside the public school system may not.

Home-school enrollment is increasing nationwide, "not only among conservative Christians but among a lot of people who are thoroughly secular," according to Jack Klenk, director of the Office of Non-Public Education in the U.S. Department of Education. Exact figures are hard to determine, but advocacy groups put the number at approximately two million children.

"If you remove the economic barrier, then all these trends change immediately," he said, pointing to Washington, D.C. as an example. The D.C. Opportunity Scholarship Program, established by Congress as the nation’s first federally funded voucher program in 2004, offers up to $7,500 in tuition to low-income students who are admitted to religious and private schools. Of the 1,800 students now receiving scholarships, about 1,000 chose to attend Catholic schools, Klenk said.

"Certainly the president and this administration have embraced the federal role" in supporting choice in education, said Morgan Brown, assistant deputy secretary for Innovation and Improvement in the Department of Education. "We believe parents have a right to choose." However, the bulk of education funding is at the state level, he pointed out.

Brown’s office also is encouraging private schools to become Supplemental Education Service providers under the terms of No Child Left Behind, which requires low-performing schools to offer extra academic help or tutoring to low-income students. Some private schools already have demonstrated the ability to raise achievement among low-income students, he said, and by becoming SES providers they could receive federal education funds to use those successful techniques with more students.

In addition to helping students from low-performing schools, private schools also play a role in nurturing a wide variety of educational methods, Halsey pointed out. Michigan’s Association of Independent Schools counts as members schools that use a traditional college-preparatory approach, the Waldorf method, Montessori method, a parent-cooperative system and more.