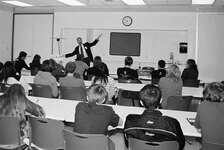 More than 470 Michigan high school debate students and coaches got a jump start on their season by attending one of four Debate Workshops hosted by the Mackinac Center for Public Policy.

The workshops, held Sept. 25-28 in Livonia, Jackson, Grand Rapids and Traverse City, gave students a chance to hear national speakers offer points both for and against this year’s topic, as well as learn round-winning strategies.

Debate students across the country will be focusing on the same question throughout their forensic competitions, that being "Resolved: That the United States federal government should establish a policy substantially increasing the number of persons serving in one or more of the following national service programs: AmeriCorps, Citizen Corps, Senior Corps, Peace Corps, Learn and Serve America, Armed Services."

The workshops featured three speakers – Richard Edwards, Mike Winther and Greg Rehmke – all of whom returned to Michigan after participating in the 2005 workshops. Edwards, a professor of communication studies at Baylor University, has been the author of the "topic introduction" feature in the Forensic Quarterly since 1972. Winther, a former high school and college debater, is a frequent lecturer at debate camps and workshops around the country, and coaches a California debate club that is consistently ranked in the top 10 nationally. Rehmke, program director for Economic Thinking, has published resource books, study guides and newsletters focused on the economic aspects of the past 20 high school debate topics.

Now in its 19th year, the Debate Workshop series is the Mackinac Center’s longest running program. More than 8,000 students have benefited from well-known speakers, receiving information and details about research, preparation and presentation.

Blake Woodward, a student at Hudson High School, put it this way: "The Debate Workshop was an informative wonderland."

For the second consecutive year, workshop attendees had a chance to win one of four $1,000 college scholarships. Students wishing to participate could submit an essay of 600 to 725 words on a subject of their choice. Styled after editorials found in newspapers, students were asked to write in both a persuasive and informational manner.

Many schools participate in the workshops on an annual basis.

"If I wasn’t a senior in high school, I definitely would like to attend again," said Kaylee Sorenson of Forest Hills Central High School.

"As a first year debate coach, this workshop was extremely beneficial to me and I know my novices are walking away with so much that will assist them as they begin their debate career," said Cheryl Pfister of East Grand Rapids High School.

Teachers and students can access more debate help any time during the year by visiting www.mackinac.org/debate and clicking on "Ask the Debate Coach." This interactive feature offers answers to debate questions within 48 hours. To learn more about the 2007 Debate Workshops, please contact Kendra Shrode at (989) 631-0900.