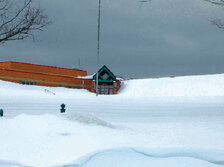 South Range Elementary School, near Houghton, is shown in this March 2006 photo after the Keweenaw Peninsula was hit with a storm that left nearly 50 inches of snow on the ground. Normal snowfall in the area for March is about 20 inches. Photo: Houghton Daily Mining Gazette.

Every day is a snow day during winter in the Upper Peninsula. It’s just a matter of which ones are bad enough to cancel school.

"We get hit with lake effect snow from both sides," Dennis Harbour, superintendent of Copper Country Intermediate School District, told Michigan Education Report. "We don’t get a lot of sleet and that sort of thing, but when we get a heavy snowfall, it just flat out comes down."

Copper Country ISD, which covers three counties and 13 school districts on the U.P.’s Keweenaw Peninsula, sees as much as 300 inches of snow a year.

"We have some long winters here," Harbour said. "Basically from late October to late April, we’re dealing with these issues. That’s a good chunk of the school year."

Harbour said it’s not uncommon to even have snow in May.

"April is a miserable month as it is, with rain and snow," he said. "But snow in May can get old in a hurry."

Copper Country ISD has a unique approach to canceling school, through an all-or-nothing policy, with Harbour making the final call after consulting with road commission officials from the three counties and a few local superintendents.

"It can lead to a lot of confusion when you’ve got one district open and the next one over is closed," Harbour said. "We’ve done it this way for the better part of 20 years and have virtually no complaints."

Harbour said people from the three county road commissions call him between 4:30 and 5 a.m. if there was snow the night before.

"They really do a great job," he said. "In most districts, it’s up to the super and the principals to go out and drive the roads, but they take care of that."

Harbour said plow drivers report road conditions, as well as estimates on how soon roads can be cleared for bus traffic.

"We have a lot of days when a total cancellation isn’t needed, but we’ll have a late start," Harbour said. "Or, if it looks like we have a big storm coming, we’ll have an early dismissal."

Jim Rayner, a third-year superintendent with Ironwood Area Schools on the far west side of the U.P., said he has canceled school a total of six times, four of them due to cold weather. He said he tries to make the call the night before, when possible.

"It’s a lot easier on parents if they find out at 10 p.m. the night before," he said. "They can make whatever arrangements they need to, rather than trying to do it on a cell phone while driving to work in the morning."

"They pretty much keep watch all night," Covitz said. "Some families might have children to attend both schools, so it’s easier if we keep the same schedule."

Harbour said the amount of snow the Keweenaw Peninsula receives is not a major issue, because the counties have the equipment to deal with it.

"The biggest factor is the visibility," he said. "Sure the buses are easy to spot, and they all have strobe lights on top, but it’s the kids at the bus stops that you have to worry about."

Blowing snow, high snow banks, drifting and rural roads all play a part in it.

"You can’t expect kids to stand out there and take a chance of someone hitting them," Harbour said.

Although the normal temperature hovers between 0 and 20 degrees most of the winter, Harbour said wind chill factors can drop as low as 30 or 40 below. That type of extreme weather also dictates closing school. Other times, the temperature may not be low enough to cancel school, but it can be low enough to keep students inside, rather than letting them out for recess or lunch.

Rayner said he relies on his career as an Air Force pilot when it comes to deciding when to close schools.

"When I was with the Air National Guard in Battle Creek, we had a contract with our civilian maintenance people that if it got colder than minus 25 with the wind chill, we didn’t fly," Rayner said. "And this was with adults who had federal-issue cold weather gear. I certainly can’t expect kids to stand outside in the same weather, especially if they’ve lost a mitten or decide they don’t want to wear their warm coat because it doesn’t look cool."

Rayner said the risk of visibility also plays a part in his decisions.

"You’ve got frost on windshields, huge snow banks," he said. "By putting kids out on the roadside, there are just a whole lot of bad things that can happen."

Some schools in the western part of the U.P. were closed on Friday, Oct. 13, as more than 10 inches of snow fell.

Covitz said Iron Mountain is located in what is often called the "banana belt" of the U.P. because it is not near the water and has relatively milder winters.

"That doesn’t mean we never get hit with snow, but just not as much," she said.

Covitz did say, however, that Upper Peninsula schools close one day a year, almost without exception, regardless of the weather. The date is Nov. 15, which is the opening day of firearms deer hunting season.

"It’s a holiday," Covitz laughed. "We have an all-female staff now, and we still close. People just expect it."

In her first year as principal, Covitz said she decided not to cancel classes, and several parents were upset.

"We have a male bus driver, and he told me he guarantees he was the only bus driver in the whole U.P. on the roads that day," she said.

Along with a unique cancellation policy come other unique weather challenges. School buses in the U.P. must be stored in heated garages during the winter.

"They’d never last outside," Harbour said. "Those diesel engines would plug right up."

Because of what Harbour calls "extreme rural conditions" in many parts of the CCISD, bumpy roads can damage rear springs on the buses.

"Those things just take a real beating," he said. "But that’s year-round."

Once all that snow has fallen, getting rid of it can pose a challenge, too.

"Because of the volume we get, at least once a month the schools have end loaders and trucks come in to cart it away," Harbour said. "It’s almost as large a problem as when it falls."

Harbour said snow piles build up high enough that you cannot see in or out of parking lots, which also causes visibility problems for entering and exiting vehicles.

"You have to either go dump it in the lake or stockpile it in a field somewhere."

Although the Upper Peninsula faces weather challenges the rest of the state does not, it receives no special treatment under state law for class time requirements.

"We get our 30 hours of clock time, just like everyone else," Harbour said. "Any cancellations or delays count against it. After that, we make up the time at the end of the year."

Rayner said aside from storing the buses inside for the Ironwood district, they also buy buses without air brakes.

"They can get condensation in them, and if that freezes, it can be bad," he said. "You also have to be careful with the diesel, because if it gets too cold, that stuff can congeal, and if you have a bus that gets stuck 10 miles outside of town full of kids, with no heat, it can be trouble."

Rayner said even if his district were to have several cancellation days, it still wouldn’t mean going to school much past June 1.

"Since they did away with the requirement for 180 days, the concept is to use your time wisely," he said. "We got rid of most of our half days, because they don’t have a lot of instructional value, and we added 10 minutes to each school day. The weather here on June 1 isn’t that great any way, so it’s better to be in school then rather than taking a big risk just to have school in the winter."