America’s Founders saw property rights as a foundation for a just society. While viewing some takings as proper, they sought to protect an individual’s property through the Fifth Amendment. This amendment contained both a just compensation requirement and a public-use requirement.

Through the years, the public-use requirement of the Fifth Amendment became watered down. The federal courts eventually settled on a model whereby judges almost always defer to the government’s contention that the taking constitutes a public use, a process that culminated in the U.S. Supreme Court’s 2005 Kelo decision. This deferential standard in essence reads the public-use requirement out of the federal Constitution.

The Kelo decision, however, triggered a backlash, and it contained a silver lining: The U.S. Supreme Court indicated that states were allowed to provide more protections for private property rights. A review of Proposal 4 shows that it essentially rejects the Kelo approach and fortifies and clarifies the Hathcock approach to eminent domain by placing substantial limits on the government’s ability to take property.

These limits include placing explicit constitutional prohibitions on any Kelo-style takings for economic development and tax revenue enhancement, restricting takings that benefit primarily private parties to point-to-point infrastructure and making the government shoulder the burden of proof that a taking is for a public use. Additionally, perhaps the most important new limit in Proposal 4 is a provision that would force government officials to show a particular property is indeed blighted by clear and convincing evidence. This new blight provision would prevent government officials from declaring entire areas blighted under vague language and turning them over to a developer, thereby achieving a taking for economic development simply by labeling the taking "an eradication of blight." This is a question that the Hathcock ruling did not address.

Not surprisingly, Hathcock also did not address the difference between the "market price" for a property and the value an unwilling homeowner would place on the property in a forced sale. Proposal 4 would modify current law by allowing some compensation for the value an owner places on his or her home.

This and the other provisions of Proposal 4 would accord a greater respect to the values individuals place upon their property and to the need to ensure that less powerful individuals do not find their lives and property continually subject to the demands of public officials and influential members of society. 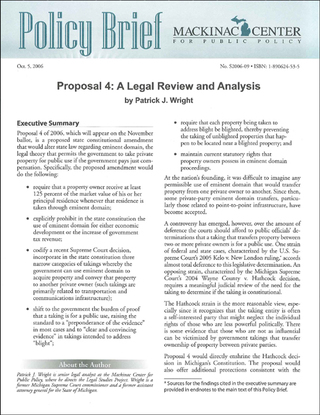