About this Document:
A Brief of Amicus Curiae

The following pages reproduce the text of a brief of amicus curiae — "a friend of the court" brief — submitted on Dec. 2, 2005, by the Mackinac Center for Public Policy to the U.S. Supreme Court in regard to two Michigan cases: Rapanos v. United States, and Carabell v. United States Army Corps of Engineers.* In both cases, federal officials have ruled that wet areas on the properties of the Rapanos and Carabell landowners constitute "wetlands."

Such "wetlands" cannot be altered by a landowner with sand, dirt or other fill material without a permit. In Carabell, a permit request was denied, and in Rapanos, a lower court found that the landowner deposited fill material in the alleged wetland without permission. The rationale for these permits is protection of the nation’s navigable waters. Such waters are distant from the Rapanos and Carabell properties.

The Mackinac Center’s amicus brief, written by Senior Legal Analyst Patrick J. Wright, supports the claims of the Rapanos and Carabell landowners in arguing that the federal government has exceeded its statutory and constitutional authority in these cases (see, for instance, the "Executive Summary" of the brief below). Readers interested in a more general discussion of the disputes may also wish to read the "Articles and Viewpoint Commentaries" listed under "Additional Research" on the final page of this study.

The Supreme Court is scheduled to hear oral arguments in the cases on Feb. 21, 2006.

The Mackinac Center’s 29-page brief in support of the Rapanos and Carabell petitioners presents four major arguments to the U.S. Supreme Court:


* Further information about the Mackinac Center’s Legal Studies Project and its amicus filings appears on Page 30 of this study. 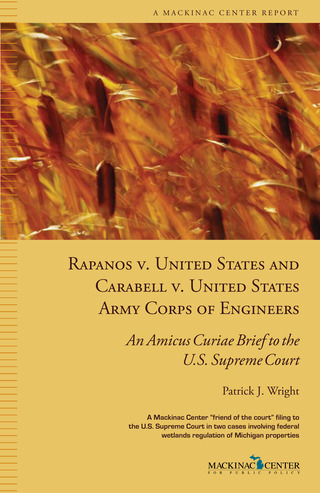