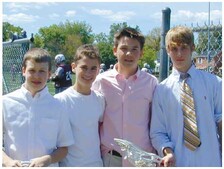 Four University of Detroit Jesuit High School students are on their way to lacrosse practice. The school serves over 800 young men.

Thomas O’Keefe says his school can do the impossible. "We bring suburban kids into the city," O’Keefe observes with a degree of pride. This school, a vestige of a once-Catholic metropolis, is the University of Detroit Jesuit High School and Academy. Reaching its heyday in the late 1950s, the school has stood by as waves of Detroit’s Catholics left the city for the burgeoning suburbs; but resilience seems to be a trademark of U of D, even in the midst of a Catholic school crisis that will see at least eight Detroit Catholic high schools close in the upcoming school year.

The decline in Catholic school enrollment in Detroit has been pronounced: 47 percent in the last five years according to the Detroit Free Press. Even President Bush took notice of the situation while he was in the Vatican for Pope John Paul II’s funeral, pleading to Cardinal Adam Maida of the Detroit Archdiocese, "Somehow, there’s got to be a way to help those poor children," reported the Free Press.

O’Keefe, who serves as vice president for institutional advancement at U of D is well aware of the recent history, noting that in 1965 there were 52 Catholic high schools in Detroit, Hamtramck and Highland Park. Of those original schools, most closed and some moved, leaving only U of D and Loyola High School, both all-boys schools. "This was a very Catholic city at one point," recalls O’Keefe, "and that has changed."

But amidst the city’s transformation, U of D has stood for consistency like the Rock of Gibraltar.

The school has existed, under the leadership of the Jesuits, since 1877. Its first location was Jefferson Avenue, but in 1927, it packed up and moved to its current campus on Seven Mile Road. An old school by many standards, O’Keefe recognizes that U of D is part of a brotherhood of thousands of Jesuit schools worldwide, in one sense able to trace its roots all the way back to St. Ignatius Loyola and his Messina, Sicily school which opened in 1548. He explains that, "The Jesuits are a Catholic religious order with many missions, one of which is education … (and educating) men regardless of their ability to pay."

“We’ve always educated a very diverse population;
at first not so much racially, but economically.”

For that purpose, U of D continues to serve a broad cross-section of students in Detroit, a large percentage of whom still hail from inside the city limits. "We’ve always educated a very diverse population; at first not so much racially, but economically," says O’Keefe. "And over the years as Detroit changed, the school became much more racially diverse." He believes, as evidenced by the school’s continued vitality, that a critical mass of Detroit-area parents are seeking this: "Parents look for academics, values, service and an ability to be educated in an environment that is heterogeneous … (We are) a real world example of people living and working together."

Obviously, with hot-button church-state considerations, public schools’ missions must necessarily be shaped by different standards than those of Catholic schools such as U of D. But it is this distinction and "teaching of values" that motivates the Jesuit high school. "We stand for something here, and we’re not constrained by the need to be politically correct," says O’Keefe. Chris Polk, who works in Development at the school, agrees: "I think in our case here in terms of a Jesuit education, one of the standout points … is seeing God in all things. And I think that translates to some of our students who are given the opportunity to see God’s face in the poor and needy, which is why (our) service component is so important. They see God in the challenges they face every day, in their success and downfalls, in their fellow students and fellow man and across their entire life."

Service to others does play a large role in the life of a U of D Jesuit student. The school’s motto, "men for others," is deeply rooted in Jesuit tradition, and according to O’Keefe and Polk, is the one standard that the school relishes most. Seniors at the high school do service projects once a week, and recently completed over 200 consecutive months of delivery to a local food bank. Students have even gone on extended trips to Honduras and Guatemala during the summertime, as well as helped on Habitat for Humanity projects in Detroit.

The emphasis on "giving back" has been beneficial for the city, contend O’Keefe and Polk. "We’re a training ground for leaders in business, politics, education and philanthropy. Our graduates are dispersed through all levels of the business community in the city of Detroit," declares O’Keefe. Polk adds that, "Not only do they (U of D graduates) come back to Detroit, but they come back and participate in the school." With a total alumni base of over 12,000, approximately 9,000 have Michigan addresses, which can actually be thought of as noteworthy, given the school’s success in preparing its students for post-secondary work that finds 50 percent of them at institutions outside of Michigan.

Academics have always been given priority at U of D, carrying on the Jesuit tradition since the early days when its Latin curriculum would outshine many Classics departments at some of America’s brightest colleges today. The commitment to academics is still evident with 99 percent of U of D’s graduates matriculating to four-year colleges and universities, and a quarter of them making it into "top 25" institutions last year. Even at schools like Harvard, Northwestern, Stanford and Notre Dame, U of D graduates outpace the national acceptance rates. "A comment we hear from graduates is that their first year of college was easier than their time here at U of D Jesuit," remarks O’Keefe.

That’s not to say that the high school hasn’t had to face serious challenges in carrying out its mission. The school serves over 800 students on its high school campus today, but as recently as 1985, U of D only graduated 85 students annually. O’Keefe explains: "I think probably one of the most difficult times for us was the late 1970s. There was a recommendation to move the school, which was turned down by the Jesuit hierarchy. As a result of that, a lot of our alumni who had gone here in the early ‘50s moved to the northern suburbs. They were counting on the school to move, and when that didn’t happen, there was a backlash and alumni chose to send their children to other schools." Even today, the school operates at the tail end of an era in which Catholic education in the city of Detroit was more abundant; a period that has become history since large portions of the city’s Catholic residents have moved to the suburbs rather steadily over the last 50 years.

But as an alternative, U of D continues to offer something worthwhile to the young men of Detroit. O’Keefe told MER that, "It (Catholic education) is important because it offers parents an option and that’s why I feel very strongly about our position in the city. As a provider of an alternative, a values-based education, if we weren’t here it would be basically public schools.And there’s a certain number of parents that are looking for an alternative."

According to U of D’s representatives, the school has a bright future even after an emigration that "killed" the Catholic schools. They believe there will always be a place for alternatives to public schools, which will call on them to continue to maintain the quality and uniqueness of U of D "because people won’t pay if they don’t feel they’re getting something for their investment."

O’Keefe says that the school has a "strong board" that realizes that U of D is at once a school and a "small business." "We can’t really run a deficit," he says, "because we have nobody to turn to to borrow money … we’ve really got to pay attention to our decisions."

He explains that financial management may have been the main factor in the closing of almost all of the other Detroit Catholic high schools, but offers this sentiment: "We sympathize and feel really badly for the families and the students and faculty that were affected by the closures. We’d love to see those schools continue because we’re such strong believers in Catholic education as an alternative to public schools. I’d love to see those schools still here." However, he says that those closures don’t affect the mission of U of D Jesuit. If anything, the school is reminded that it must be diligent in raising funds, advertising and making sound financial decisions in the absence of any real "safety net."

The University of Detroit Jesuit High School and Academy is determined to weather the storms of emigration and closure, relying on the belief that providing an education of measurable results for a parent’s investment and producing "men for others" will always have a place among the education options in Detroit and its suburbs.