Decision could shutter more than 30 schools 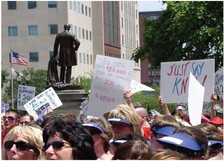 The Michigan Education Association has sued officials and departments of the state of Michigan, alleging that the state has violated the state constitution by financing charter schools sponsored by Bay Mills Community College in Brimley, Mich. If the lawsuit succeeds, more than 30 schools chartered by the college could lose state funding, and Bay Mills — a key player in the expansion of public school academies in Michigan — could have its ability to charter schools revoked altogether.

The lawsuit names the state superintendent of public instruction, the Department of Education, the state Board of Education, the state treasurer and the Department of Treasury as defendants. The defendants are accused in the suit of "the unconstitutional and/or illegal expenditures of state funds which jeopardizes the continued integrity and viability of Michigan’s system of public education." The MEA claims standing to file the suit as an organization whose purpose is "the improvement of education," and it requests court action to prevent "irreparable harm."

But by 2001, Bay Mills had concluded that its status as a federal, tribally controlled community college would enable it to establish schools outside its neighborhood. The school, under the language of its charter, contends that the whole state of Michigan functions as its chartering "district." Accordingly, Bay Mills has opened charter schools in Bay City, Pontiac, Hamtramck and even Detroit-area locations, far from its home on the shores of Lake Superior. The schools, like many other Michigan charter schools, are not unionized.

Controversy over Bay Mills’ "circumventing the cap" led six state representatives to request a 2001 state attorney general opinion on "whether a public school academy authorized by a federal tribally controlled community college is, under the Revised School Code, subject to any geographic limitations." The opinion, written by then-Attorney General Jennifer Granholm, determined that federal tribally controlled community colleges like Bay Mills were subject to provision 502(2)(c) of the code, meaning that their ability to establish public school academies indeed was limited geographically by the boundaries of their district.

Granholm’s opinion legitimized — at least temporarily — state funding of the Bay Mills charter schools. Bay Mills has even opened a charter school office and continued to establish new public school academies all over the state.

The MEA lawsuit seeks to end this. Specifically, the MEA filing in the case makes four general allegations:

Bay Mills: No effect on plans

Despite the implicit threat to the existence of the schools, Bay Mills Charter School Office Director Patrick Shannon told Michigan Education Report that the lawsuit so far has not affected the office’s scheduled plans for next year or the rate at which they are chartering new schools. The community college was able to authorize 17 schools last year, and according to Shannon, the charter office predicts that three or four new charter schools will open next fall.

Shannon stated that the recent decrease in the rate of new schools is part of Bay Mills’ overall business plan, not a reaction to the legal challenges. He nevertheless characterized the lawsuit as "unfortunate litigation," noting, "It will be very costly for all parties involved, and for all of the authorizers, but it will be aggressively defended."

As noted above, however, state departments and officials — not Bay Mills or its charter schools — are the defendants in the case. To provide Bay Mills and its schools an opportunity to join the litigation in a case that directly affects them, the Bay Mills Board of Regents, the charter schools and the companies that manage the schools have formed the Coalition for Educational Choice. The coalition may seek to intervene in the case.

Lawyers for Bay Mills and the coalition have been reluctant to comment publicly on the MEA’s allegations in the suit. Nevertheless, LaRae G. Munk, attorney for a number of academies authorized by Bay Mills Community College, has reviewed the court filings and believes the legal issues in this case have been addressed not just in the 2001 attorney general opinion, but also when the Legislature had the opportunity to look at Bay Mills’ role as an authorizer. In both cases, Bay Mills was found to be in full compliance.

Munk makes several other points in rebuttal of the charges in the MEA’s complaint. She asserts that in order for the state Department of Education to approve a charter school, a departmental review must take place to make sure the school is in full compliance with the law. She notes that one Michigan statute summarily declares charter schools legal if they have been in operation for at least two years, as many of the Bay Mills schools have. And according to Munk, public agencies have a right to contract with private entities as long as they maintain statutory oversight and the delegated tasks are carried out legally.

The question of Bay Mills’ use of private management was allegedly discussed at a 2004 meeting between the MEA executive director, general counsel and former state superintendent Tom Watkins. As described in the lawsuit, the union alleged that Bay Mills was not fulfilling its school oversight responsibilities since it had delegated certain supervisory functions to private management companies. Watkins, however, did not exercise his authority as state superintendent to preclude the disbursement of Michigan Treasury monies to the Bay Mills schools. The MEA alleges that Watkins thus "failed to act" in accordance with the legal requirements of his office, despite "unconvertible (sic) evidence."

The lawsuit now awaits action in the Ingham County Circuit Court, which will determine if Bay Mills’ actions as an authorizing body have violated the powers allotted to it under the Michigan School Code. Any decision by the court might well be appealed.

If the lawsuit is ultimately upheld, the real-life impact could be far-reaching. The 30-plus Bay Mills charter schools, which have enrolled more than 8,000 students, could be forced to close if state funds are withheld by the court’s decision. By law, charter schools are unable to levy local tax millages, so they must rely almost exclusively on the state-allocated operating funds that are threatened by the suit.

Bay County Public School Academy Principal William Ignatowski, who oversees a Bay Mills charter school of 340 students, says that his school could not survive without state funds and emphasizes, "We’re not really sure how this (lawsuit) is going to turn out." He believes the case will be "wrapped up" in the courts for years.