Watkins Gets It Right 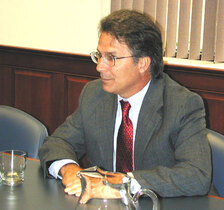 Tom Watkins is shown above at the Mackinac Center in August 2001, listening to alternative views.

We should take a moment to applaud a recent remark by State Superintendent of Public Instruction Tom Watkins. When asked to comment about criticism of Michigan’s charter schools, he told The Grand Rapids Press that some traditional schools "will complain about losing 300 [students] to a charter, but you won't hear a peep out of them when 3,000 [dropouts] go to the street."

It took courage to make such a candid observation in Michigan’s contentious education environment, where simply exercising the right to free speech can get ugly. Beneficiaries of the near-monopoly school system will stop at very little to quash charter schools.

In its annual financial report, the district recently wrote: "However, the school district is faced with a number of significant challenges in attempting to halt or at least slow the rate of student loss. Charter schools and private schools have taken a significant number of students."

Astute readers will note the words "have taken" — as if charter schools misappropriated something that belonged to the district. Obviously, while charter schools may have attracted many students, they haven't "taken" anyone, since students can’t be forced to attend them.

Contrast this subtle inference and the tone-deaf clamor of the Detroit Federation of Teachers about charter schools with a powerful and disturbing fact: Only 44 percent of DPS students even graduate, to say nothing of the skill level of those who do.

Where are expressions of concern over the five or six Detroit students out of every 10 who are entering adult life without the benefit of a high school diploma?

I not only concur with Superintendent Watkins' observation; I would urge policymakers to further deregulate existing charter schools and to create policy that will allow for unfettered choice that includes private schools and the creation of new charter schools — especially within the Detroit public school system, whose current financial bankruptcy suggests that it was academically bankrupt long ago.

The reason to support parental choice in education is simple: It is a historically undeniable truth that market competition produces the best results at the best prices with the most choices, and there are many instances where markets have been employed in education. When a high quality education becomes available to every Michigan family, we won't be losing every other kid to the streets.

It's not every day that a high-ranking official has the guts to say so publicly.

Brian L. Carpenter is director of the leadership development initiative for the Mackinac Center for Public Policy, a research and educational institute headquartered in Midland, Mich. Permission to reprint in whole or in part is hereby granted, provided that the author and the Center are properly cited.