We can learn a lot from the reforms that have been tried to date. We know that indiscriminately channeling more funding into our existing education system does not reliably improve outcomes. We also know that some relatively expensive programs, such as reducing class size, can achieve positive results, but that these are far more limited in scope than we thought. Our experiences with both government-imposed standards and model-school programs reveal that good intentions don't reliably translate into good outcomes.

Without some kind of incentive structure to ensure that standards and materials are wisely chosen and properly implemented, practical applications often fail to live up to expectations. Charter schools and vouchers attempt to add that missing ingredient, by injecting parental choice and competition between schools into our education system. Early results are generally positive, but critics of these programs are still far from convinced.

At the very least, past reforms point to the need for a systematic, reliable, lasting mechanism for promoting educational excellence. The question is: Where to look for such a mechanism? We can ask how people in other nations educate their children, but most industrialized nations have systems very similar to our own. There are certainly variations in outcomes between them, but these are generally attributable to cultural factors, and to current curriculum choices (often just as arbitrary as our own), and so provide only limited insight into the sort of system we seek.[47]

What we can do is look at history. Schooling is not a new invention. Its lineage can be traced back two-and-a-half-thousand years, and this awesome wealth of experience has many lessons to teach us. We cannot, however, just pick and choose one or a few historical school systems and claim that they would necessarily work for us today. After all, many factors outside the classroom affect educational outcomes, and societies have changed much in the past two-and-a-half millennia.

A more promising approach is to look for trends in the kinds of systems that worked well or poorly across many different cultural settings. We can also compare educational outcomes between similar and contemporary societies that adopted different education systems. Finally, it is useful to see what happened to educational outcomes when a given society abandoned one system of education in favor of another.

In Market Education: The Unknown History, I applied this three-pronged approach to a dozen civilizations from Greece in the 5th century B.C. and the early medieval Muslim empire, to 19th century America and modern Japan.[48] That research led to the following remarkable conclusion:

Free education markets, in which parents choose their children's schools and schools must compete with one another to attract and serve those children, consistently outperform all other approaches to school governance.

Though parental choice and market forces are seen as path-breaking innovations by their advocates and as dangerously unprecedented reforms by their opponents, they are neither. The first system of broad-based education that reached beyond a tiny ruling elite was the education marketplace of ancient Athens, 2,500 years ago. Time and again throughout history, individuals and groups created schools in response to public demand without the need for government intervention. Even the view that state-run school systems were needed to bring literacy and learning to the masses is mistaken. Both literacy and elementary school enrollment were nearly universal in England and the United States before public schools were widely established in either nation.

The wealth of evidence on which these findings are based is extensive. So much so, in fact, that it is difficult to do it justice within the confines of so brief an essay as this. Rather than attempt a pared-down summary of that evidence which would unavoidably be "abridged too far," I encourage readers to see the full presentation in Market Education. In place of an overly compressed list of historical precedents, it's more sensible to jump right to the heart of the matter: to a discussion of the reasons why education markets have consistently performed so well under widely varying social conditions.

Taken together, these five factors create the incentive that is missing from the current system. They promote the development of effective educational methods, and also the dissemination and perpetuation of those methods. They constitute, in other words, exactly the sort of mechanism we are looking for to address our educational problems.

Are they controversial? Yes. Would most of us prefer it if direct parental financial responsibility and the profit motive could be dropped from the list? Of course. There is no question that if effective substitutes could be found for these factors it would significantly broaden the appeal of an education market.

The trouble is, there are no such substitutes. Having parents pay directly for their own children's education has proven to be an indispensable component of effective education markets from their inception in classical Athens all the way to their most recent incarnation in the Japanese tutoring system that has given us successes like Kumon. However distasteful this idea may seem on the surface, the logic that underlies it is obvious and inescapable: what people pay for, they pay attention to, and what they get for free they become complacent about. We all know this to be true from our everyday lives, and the fact that it holds just as true in the field of education as it does elsewhere should not surprise us.

Nevertheless, it does pose a problem. How do we ensure that all children, regardless of family income, have access to good schools if the creation and perpetuation of good schools depends on parents footing some or all of the bill? We do not have to look far for the answer. By offering need-based financial assistance to low-income parents, all Americans could become full participants in the educational marketplace. Those who could afford to pay for their own children's education would do so, while those needing varying degrees of financial help would receive it. This would preserve the benefits of direct tuition payment by parents for the vast majority of the population, since only a fraction of parents would need to have the entire cost of their children's education defrayed by others.[50]

The best way to provide such assistance has been a subject of considerable debate among scholars in recent years, but unlike most education policy debates, it has been remarkably civil, rational, and empirically grounded. The people attempting to resolve this issue have demonstrated that their concern is simply to find the best way of empowering low-income parents to pursue educational excellence for their children.

Some favor a form of education voucher similar to that in use in the city of Milwaukee, while others seek to promote the spread of private scholarship-granting organizations through the use tax credits, as the state of Arizona has begun to do. One thing that both sides agree on is that existing programs currently serve far too few children, and that all of our nation's families deserve to be empowered to seek out the best schools for them, whether those schools are independent or are run by the state.

The other element of true education markets that lacks popular appeal is the need for a more substantial percentage of schools to be operated for-profit. While this idea certainly sounds mercenary in the context we're used to on the subject of education, it only expresses what we all mean when we say that private schools seem to be of higher quality than public ones. Private schools have the incentive to excel that public schools do not, and for this reason, they do better. That's why so many public school teachers send their children to them.[51]

No matter how unsettling the idea of for-profit schools may seem to us today, their importance is as obvious as it is monumental. The absence of the profit motive has been the chief reason that the top teachers and the best methods have been unable to reach the millions of children who need them.

In the absence of a profit motive, the best public and independent non-profit schools serve roughly the same number of children year after year, simply turning away children when their existing classrooms are full. Institutions like the elite prep schools of New England and the progressive Laboratory School in Chicago have not been able to reach more than one or a few thousand students annually, though many have been in existence for more than a century.

Contrast their experience with that of for-profit tutoring schools such as Kumon, which have managed to grow explosively to keep pace with growing demand. Within the vibrant Japanese tutoring industry, top teachers are paid salaries on a par with that nation's top baseball players. By creating new curricula, developing new methods, and training new teachers, these top teachers are able to bring their gifts to hundreds of thousands of children.

Kumon and its Japanese competitors are not alone. Other popular for-profit tutoring schools, such as America's own Sylvan Learning Systems, have also managed to expand rapidly in response to rising demand for their services. Even at the college level, institutions like the University of Phoenix have demonstrated how the profit motive can fuel rapid expansion of schools that do a good job of meeting students' needs. It has long been known that the ability to rapidly disseminate popular services is a hallmark of for-profit enterprises.[52] The belief that this relationship does not apply to schools is based on prejudice and simply mistaken.[53]

Once we've made it over the twin hurdles of accepting the need for parents to have direct financial responsibility for their children's education and the need for at least some schools to be spurred to excellence by the profit motive, there still remains the nagging question of the social effects of market education. We all want our schools to foster strong and harmonious communities, and we would not wish to jeopardize that goal even if literacy rates and academic achievement were greatly improved in the process.

Fortunately, concerns over the social effects of parental choice in an open marketplace have been unwarranted. In fact, they have been exactly backward. Time and again, it has been free education markets that have allowed diverse groups to harmoniously pursue both their shared educational goals and their unique and varied traditions.

It has not been diversity that has set neighbor against neighbor, but coercion. If parents had been allowed to choose their own schools rather than being forced to relocate in order to send their children elsewhere, much of the segregation of neighborhoods over the past several decades by socioeconomic level would never have taken place. We seldom think of the public education system in terms other than those of equality of opportunity for all, but this is an instance in which the cause of equality has been disserved by public school policy.

When understood in this way, the endless series of battles for control of public schooling can finally be seen for what it is, an inevitable and unfortunate side effect of creating an establishment of education. The founding fathers of our nation wisely forbade Congress from establishing a single system of religion for all citizens, in order to avoid the turmoil that this had caused in England. So, too, must we realize that any establishment of a single "official" system of education for all children invariably leads to conflict within diverse communities. It has repeatedly done so throughout history.

Free-market education, by contrast, has consistently allowed heterogeneous peoples to more harmoniously pursue their educational needs and goals.[54] Though private schools have become vastly better integrated over the past 40 years, our public school system is little better integrated today than it was when the first mandatory busing program was introduced.[55] 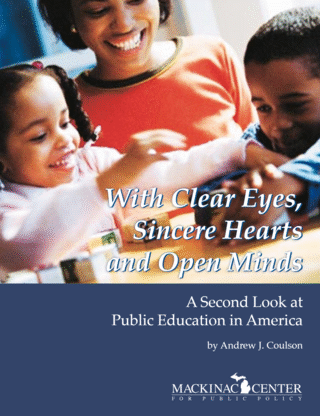