The annual tradition of Labor Day news stories this year will be heavily infused with presidential politics. It is indeed important to know how labor union officials will spend their significant resources to influence election outcomes. But the future viability of unions as a political force may be revealed by today’s attitudes of union members toward their unions.

This summer Zogby International and the Mackinac Center for Public Policy undertook a nationwide survey of union members to determine their views of their unions’ performance. We asked union members about union effectiveness, union responsibilities, union political spending, ways for workers to create a union and how unions should treat workers.

The survey results illuminate discussion of one long-term trend and one current legal issue. Overall union membership has declined significantly in the United States since the 1970s,[1] even in Michigan. Worker attitudes toward their own unions may partly explain the lessening appeal of unions.

Partly in response to their declining membership, union officials have embarked on a new organizing tactic that is now the subject of a legal challenge. The new tactic, called “card check” and “neutrality agreement,” involves union and company officials agreeing to bypass the normal government-supervised secret-ballot election that allows workers to determine whether a union will represent the employees. The tactic is favored by unions because it is a less costly and more successful means of organizing workplaces.[2] In 2005, the National Labor Relations Board is expected to decide if workers will be allowed to challenge the existence of unions created using the tactic.[3]

Former NLRB member John Raudabaugh, a Detroit attorney, was reported by the Detroit Free Press as saying the NLRB’s card-check decision is the most important issue in American labor law in the last 10 years. Independent of the NLRB decision, worker attitudes toward their unions in general and the card-check tactic in particular will influence unions’ success in adding to their ranks and political strength. 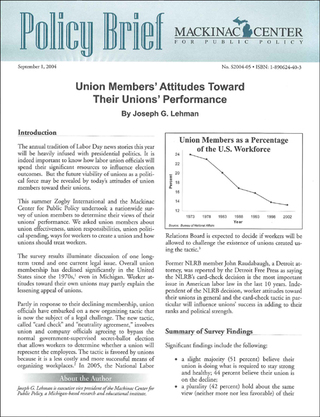