6. Is telecommunications a “natural monopoly”?

AT&T secured its monopoly with the cooperation of state and federal officials.

The theory of “natural monopoly,” now widely questioned, presumed that redundant telephone infrastructure was economically inefficient. For example, a 1921 report by the Michigan Public Service Commission concluded that “competition resulted in duplication of investment,” and that states were justified in denying requests by rivals to deploy new lines.[10] A report that same year from the U.S. House of Representatives likewise concluded that “there is nothing to be gained by local competition in the telephone business.”[11]

The same view was also misapplied to electric power supply and water treatment, triggering creation of a massive regulatory structure to temper government-sanctioned monopoly power. In hindsight, competition could have restrained utility monopolies by generating new technologies and applications that instead took decades to achieve.

The drawbacks of the regulated-monopoly approach are now more widely recognized. Firms that enjoy government protection from competition, and for whom rates of return are guaranteed through regulation, face less financial pressure to innovate or operate efficiently. Moreover, regulators often become so committed to the regulatory structure that they regard competition as a threat, rather than as a potential solution to the very structural conditions that led to the adoption of regulation.

By 1925, telecom rate regulation was in effect across most of the nation, and competition was either discouraged or explicitly prohibited. The regulatory structure was finalized when Congress created the Federal Communications Commission in 1934.

In enacting the Communications Act of 1934, Congress authorized the new agency to impose service requirements priced at regulated rates. Any deviations in product or service required government approval, a laborious process then as now. Many such regulatory strictures persist despite fierce market competition.

As noted by a 1988 Department of Commerce report: “The chief focus of the Communications Act of 1934 was on the regulation of telecommunications, not necessarily its maximum development and promotion. (T)he drafters of the legislation saw the talents and resources of the industry presenting more of a challenge to the public interest than an opportunity for national progress.”[12]

Thus, with the cooperation of state and federal officials, AT&T secured its dominance over telephone service for decades to come, controlling more than 80 percent of all telephone lines and assuming family status as “Ma Bell.”[13] 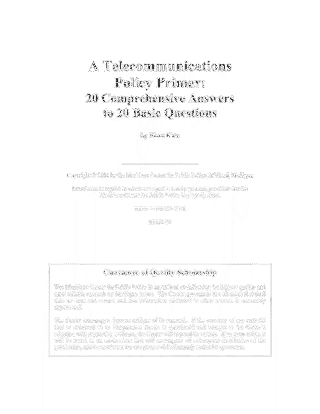