Number Six: Under Medicare, people get the health care services that they need

A whole host of things need to be said here, and I don’t have time for them all. Let me start by saying that while the language of Medicare is that Canadians get "medically necessary services" paid for by the state, this is not at all so. Among the services that are not covered are pharmaceuticals (increasingly important as many forms of surgery, etc. are now being supplanted by drugs regulating the body’s functions), dentistry, home care, chiropractic (in most provinces), and a number of other services. And there is a wide range of new diagnostic and other services that it is not yet clear that Medicare will cover. Such as gene therapy. In fact, one of the "brilliant" research papers for the Romanow commission argued that in fact technology need not be a cost driver for the health care system because it was only a cost driver if we actually used these technologies….

Let’s talk about a few other aspects of whether we get the care that we need in Canada.

Queuing is a controversial measurement, not least because there may be many explanations for the queuing, many of them medically justifiable, so that aggregate queuing figures may conflate those whose waiting poses no health or other risk with those whose health may be impaired or may suffer pain while waiting.

That being said, in a system in which health services are free at the point of consumption, queuing is the most common form of rationing scarce medical resources. And since patient satisfaction plays no part in determining incomes or other economic rewards for health care providers and administrators in the public system, patients’ time is treated as if it has no value. There are no penalties in the system for making people wait.

It is thus not surprising that the measures of queuing now available, including the Fraser Institute’s annual report card Waiting your turn,[5] indicate a lengthening of queues for a great many medical services, including access to some specialists, diagnostic testing and surgery. What is surprising is that those administering the system must rely on external studies, not having implemented modern information systems to monitor waiting periods and to identify those who have had excessive waits.

I’d also like to point out that while we talk a lot about queuing in the Canadian health care system, and we talk as if we know how many people are waiting and how long they wait, in fact we do not know this at all. In fact, ironically for the largest single program expenditure of governments in Canada, we know astonishingly little about what we get for our money. As my colleague David Zitner, Director of Medical Informatics at Dalhousie University in Halifax, and Health Policy Fellow at my Institute, likes to say, no health care institution in Canada can tell you how many people got better, how many people got worse, and how many people’s conditions were left unchanged by their contact with their institution. None of them can give you an answer. No one knows how many people died while waiting for needed surgery. No one knows how many people are queuing for any particular procedure, or how many people cannot find a family doctor. Mostly we have guesswork, anecdotes and subjective measures, not objective ones (such as the Fraser Institute reports mentioned earlier). We don’t even know how long someone has to wait before they’ve waited "too long", because the health care system does not establish official standards for timely care, although presumably even Mr. Romanow would agree that someone who died while waiting for care may have waited a tad too long.

All of this is due, as I argued in a major paper I co-authored last year,[6] to the conflict of interest at the heart of Medicare, in which the people who are the ultimate providers of health care services in Canada are also the people charged with regulating the system and with quality assurance. Since no one is a competent judge of their own performance, and no one likes to be held accountable for their work, the result is that the health care system simply doesn’t set tough standards or collect the information that would allow us to hold the system’s administrators accountable for their stewardship of our health care and the billions of dollars they spend. The people who would collect the information are also the people whose performance would be assessed if useful information were made available. There appears to be no legal obligation for governments actually to supply the services they have promised to the population. This is an appalling double standard, as no responsible regulator would permit a private supplier of insurance to behave in this way, as a recent background paper for my Institute makes clear.[7]

Aggregate numbers of doctors per 1000 population do not give a good picture of access to physicians in, say, cities versus rural areas within countries, nor of proportions between scarce specialists and plentiful GPs, nor of the quality of medical training. On the other hand, it does provide a crude measure of the overall state of access to qualified practitioners. On this measure, Canada performs badly. In 1996 this country had 2.1 practicing physicians per 1000 population, while of the comparison group only two (Japan and the UK) had a lower ratio: Australia (2.5), France (3.0), Germany (3.4), Japan (1.8), Sweden (3.1), Switzerland (3.2), UK (1.7) and U.S. (2.6). Thus, even in countries with lower per-capita spending than Canada, there is greater access to physician services.

With respect to medical technology, Canada’s performance is also unimpressive. In a study[8] comparing Canadians’ access to four specific medical technologies (computed tomography or CT scanners, radiation equipment, lithotriptors and magnetic resonance imagers), with the access of citizens from other OECD countries, Canadians’ access was significantly poorer compared to three of the four. Despite spending a full 1.6% of GDP more than the OECD average on health care, Canadians were well down the league tables in access to CT scanners (21st of 28), lithotriptors (19th out of 22) and MRIs (19th out of 27). Moreover, access to several of these technologies has worsened relative to access in other countries over the last decade. 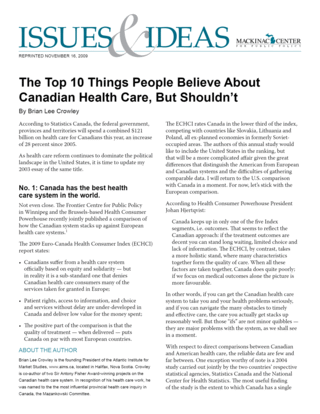