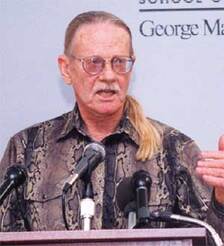 Vernon L. Smith, shown here, is the 2002 winner of the Nobel prize in economics. A scholar associated with George Mason University, Smith’s research shows the benefits of land privatization, an idea examined by Michigan Privatization Report in past issues.

The 2002 Bank of Sweden Prize in Economic Sciences (more commonly known as the Nobel prize in economics) was awarded to two American economists on Oct. 9, 2002. One of the winners, Vernon L. Smith, is an advocate of federal land privatization. Michigan's government, which owns 12 percent of the state's land, could learn from the newest Nobel laureate's findings.

In 1999 Smith co-authored a Cato Institute study, “How and Why to Privatize Federal Lands,” which describes in detail how government ownership results in economic and ecological mismanagement of public lands. The solution, say the authors “is to get the incentives right for both the treasury and the environment” by privatizing federal land holdings.

Former Mackinac Center for Public Policy researcher and author Peter T. Leeson wrote a related article also in 1999 for Michigan Privatization Report, the nation's largest quarterly privatization journal. The article, “Land Ho! Should Government Be Lanlord?” described the extent of state landholdings and concluded that the state should sell off some of its property.

Smith, 75, is Professor of Economics and Law at George Mason University in Virginia. He received his Nobel award for path-breaking work in experimental economics, demonstrating the importance of “alternative institutions,” in such matters as privatization.

Alternative institutions show how tests could be conducted on public policies in a laboratory setting before being applied in practice. The Swedish Academy specifically cited his research with respect to public utility privatization when announcing his award. Smith co-authored a paper on this subject in the Cato Journal, a publication of the Cato Institute.

It is refreshing to see the Royal Swedish Academy pick winners from among men and women who have studied privatization's effects, even controversial privatization such as the sale of public land. To its credit, the Academy has surveyed Smith's record of accomplishment with policy research institutes and universities, and found his work deserving. Hopefully, Michigan officials will apply sound economic principles to the question of how much land the state needs to own.