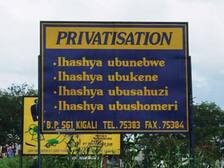 As senior managing editor of Michigan Privatization Report, the largest circulating quarterly of its kind in the world, I have virtually "seen it all" with respect to privatization. Now, I have heard it all. An English language, African-based band named, "Afrigo," from Uganda has released a song entitled, "Today for Tomorrow," which celebrates the benefits of privatization. It's not Jimmy Buffet, but it's not half bad.

Here is a sample of the lyrics:

You and I didn't create the situation/ Let's unite/check the economy/ a better future for our children;

Make a hard decision today and it will pay off in the future . . .

According to MP3.com, where this track can be found, Afrigo's album has been downloaded more than 25,000 times.

This one little song may seem insignificant enough to most people but for me it carries enormous implications for Uganda and maybe even for the United States and Michigan. No, I don't expect it to be No. 1 on the African hit parade (although who would have expected someone to put out a song about privatization?). But when public policy strategies become so well known that they are celebrated in pop music, it means the idea itself has become infused in the culture.

And infusing an idea in the culture is no small task since ideas, however benign or controversial, often take decades to percolate before reaching a "tipping point," where paradigms shift on a grand scale and with alacrity. In fact, "The Tipping Point" is the title of a book by Malcolm Gladwell, who defines the term as "that magic moment when an idea, trend, or social behavior crosses a threshold, tips, and spreads like wildfire."

There's no reason to believe what's happening in Uganda is confined to that African nation. Who knows? Maybe the word "privatization" will become a rallying cry against corruption, and for greater economic freedom.

The good news is that apparently there is a culture of privatization developing around the globe. As it gains momentum, let us hope that American policy-makers take the cue and more seriously look at privatization as a policy option. And who knows? It could catch on so well, even Britney Spears might sing about it.