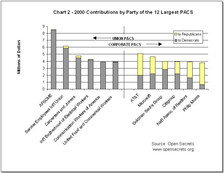 Perhaps the worst kept secret in both Washington and Lansing is the extent to which unions are active in political campaigns.  By using clever labels such as "issue advocacy," "voter education," "organizational partnerships with political parties" and "public relations," to describe activities that in ordinary parlance would clearly be considered partisan, and by making relatively few outright contributions to campaigns, unions are able to pretend they spend less on politics than they actually do, even while building tremendous political influence, especially within the Democratic Party.

Chart 3 - Refund Offered by Union vs. Refund Ordered by Court

For example, since the mid-nineties, the MEA's parent union, the National Education Association, has claimed on its federal tax forms that it hasn't spent a single dollar on politics, even while it participated in Democratic Party steering committees, campaigns, and get-out-the-vote drives.[29]  Political action committee (PAC) contributions are a small part of the union political effort, but even in that one area unions have a huge impact, with six of the top 12 PACs nationwide being run by various labor unions.[30] (See Chart 2.)

Rutgers University economist Leo Troy estimated in 1996 that for every dollar of publicly acknowledged PAC contributions, unions spend 3 to 5 dollars in soft-money and in-kind political contributions, which are much more difficult to track.[31]

By law, workers are entitled to a refund of their share of political expenditures if they wish it, thanks to the Beck case described earlier.  In practice, however, the unions' ability to disguise political spending means that getting a full refund requires a herculean effort few workers are willing to endure.  Typically, those workers who successfully pursue a refund will receive about 20 percent of his or her dues.  Sometimes even that requires litigation.[32]

If what union officials claim is true, 80 percent of union revenue is spent on representation of the interests of workers.  Yet, on the rare occasion when workers have the persistence and good fortune to get a look at the union books, an entirely different picture of union spending and priorities emerges.

The Supreme Court has examined union financial records in two cases.  In the original Beck case, the Court found, 12 years after Beck filed his original suit, that 79 percent of his dues were not chargeable, nearly the reverse of what unions typically claim.[33]  In a follow-up case, Lehnert v. Ferris Faculty Association, the Supreme Court found that the defendant union, an affiliate of the MEA, spent only 10 percent of its dues revenue on employee representation.[34] (See Chart 3.)

Estimates of union political spending in the 2000 campaign went as high as $900 million nationwide.[35]  Although roughly a third of union members voted for Bush in 2000, nearly all of the union effort was calculated to help Democrats.[36]  This stands in stark contrast to most other large contributors, who tended to split contributions more evenly.[37]   (See Chart 2.)

In addition to contributing to PACs, union staffers worked full-time for political campaigns, in some instances taking paid leave to do so.  Shop stewards held "worksite blitzes" in which they cajoled workers to vote for candidates favored by  union officials. Unions distributed voter guides that favored Democrats without giving formal endorsements, and provided election day rides to the polls for people likely to vote for Democrats.[38]  Other than PAC contributions, none of these activities is subject to disclosure either for tax or campaign reporting purposes.  Except for those workers who actively supported the Democratic ticket and volunteered their time, most union members were only vaguely aware of the lengths to which their unions went to back the Democratic ticket.  And union officials carried out their activities in ways that kept members in the dark.

Mandatory agency fees leave union officials almost completely unaccountable to the workers they are charged to represent.  Many union officials roam where they will at workers' expense.  Some, such as the officials of District Council 37 in New York, choose the lap of luxury.  Others, as may be happening with greater frequency in the UAW, are trying out life on the management side of the fence.  Many pursue political influence.

[36] According to a poll taken by the Gallup Organization, completed November 5, 2000.  Results are available at http://www.gallup.com

[38] Op. cit., Exposing the Forced-Dues Base of Big Labor's Political Machine, p. 4, 5.  It should be noted that get-out-the-vote efforts, such as providing rides to the polls, may appear non-partisan but they are easily targeted geographically to maximize turnout for one party or another.