Without choice, public education will not improve 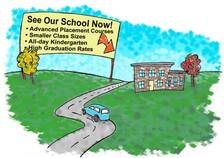 Is public education improving in Michigan?

Over the past decade, the state of Michigan has laid some important groundwork for improving public education. The Legislature passed one of the nation's best charter-school laws and introduced a measure of competition by funding public schools according to the number of students a school is able to attract. An increase in the state sales tax from 4 to 6 percent made it possible for a homestead exemption from local millages, creating a more level playing field for less affluent districts. But, by and large, public schooling in Michigan has failed to improve dramatically.

Students across Michigan continue to graduate from high school without knowing the basics. A 2000 study by Mackinac Center for Public Policy Adjunct Scholar and Harvard Program on Education Policy and Governance Research Associate Dr. Jay P. Greene revealed that Michigan businesses and institutions of higher learning spend more than $600 million per year to compensate for the lack of basic reading, writing, and arithmetic skills among high school graduates and employees.

Meanwhile, defenders of the educational status quo have been working overtime to hold school choice initiatives at bay. Half of Michigan's public schools still refuse to participate in the state's public schools-of-choice program, which allows students the minimal freedom to attend school in an adjoining district. Currently, only 283 of Michigan's 554 school districts participate. Another 165 districts have created their own choice programs, but many place severe restrictions on the number of students who can participate. That leaves over 100 districts that offer no choice whatsoever. The result: Only 1.5 percent of Michigan students are able to participate in even a minimal level of public school choice.

Michigan's charter school efforts did enjoy some success in the late 1990s before running into a brick wall. The state cap of 150 university-authorized charter schools was reached in 1999. During the 2000-01 school year, 3.4 percent of Michigan public school students were enrolled in charter schools. Although Michigan citizens have clearly shown they want more charter schools, as evidenced by huge enrollment waiting lists and applications for new charters, the Michigan Education Association's powerful lobbying efforts have ensured that bills designed to raise the cap have failed by a small margin in the state Legislature.

True choice in education remains available largely to those who can afford to move into more affluent districts or pay for private school tuition. Not surprisingly, a record number of Michigan parents of all socioeconomic backgrounds, fed-up with the poor performance of their local schools, are turning to home-schooling, despite the personal sacrifice it requires. The National Home Education Research Institute estimates that nationwide, the number of home-schoolers is growing at a rate of 7-15 percent per year. Dr. Brian Ray, president of the National Home Education Research Institute in Salem, Ore., estimates that there are currently 70,000-95,000 students in Michigan who are educated at home, a number equal to approximately 5 percent of Michigan's public school enrollment.

Bottom line: the main reason education in Michigan is improving at all is because lawmakers have been able to push through limited reforms such as charter schools and public schools-of-choice, in spite of a grumbling education establishment that digs in its heels at every turn. And those measures that do pass are being stymied by delaying tactics from that same unwilling establishment.

Michigan citizens must understand that the future of dramatic improvements in public education is in jeopardy. Without the implementation of greater choice and competition, public education will remain in the quagmire of mediocrity. The sooner lawmakers realize this, the sooner we will be on our way toward fulfilling the promise of a quality education for every child in Michigan.

Erich Heidenreich, DDS, is the founder and president of Marshall Academy, a charter school in Marshall, Michigan. 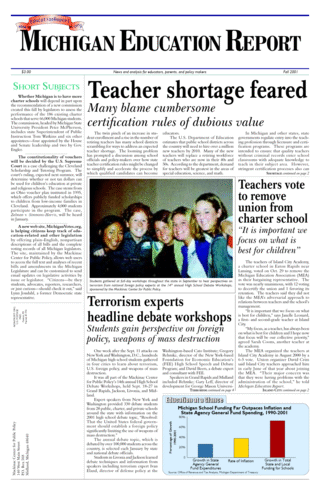