We are preparing for life 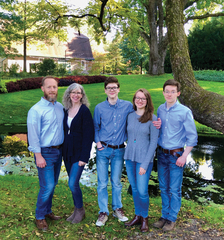 For many years, the Latin phrase, “Ad vitam paramus” adorned the family room wall in our Arizona home. That phrase was a constant influence in our lives and the lives of our kids as they completed their daily homeschool studies.

The phrase translates into English as “we are preparing for life.”

Being prepared for life mixes our commitment to God and to personal responsibility with the recognition that life is a thing worth doing well. We often miss the mark but still believe that a consistent focus on core freedoms and liberties, and the abundant opportunities we enjoy in Western society, can be matched with hard work and commitment to some basic foundational beliefs. Taken together, these ideas lay the foundation for a meaningful and successful life.

Preparing for life also fits with another core belief: Humans are inextricably linked to their environment. For us to flourish, we must have a firm grasp on the science and policies that govern our management of that environment. Hoping that faceless “experts” in a Washington, D.C., office know what they’re doing will not cut it.

So the Hayes family lives life believing that each day, you have to grab on to the opportunities you have to learn and grow. Failing to do so means you will stall out or regress.

We came by our commitment to a “life lived well” honestly. Tanya’s mother was a top-selling real estate agent, so a tireless focus on your customers was just what you did. My own mother was a senior-level emergency room nurse, meaning that calmly serving others in the face of extreme circumstances was normal. My father was a tenured academic and dean who, despite facing consistent, motivated and vitriolic resistance, regularly dared to speak about his conservative views in the education faculties in which he worked.

We learned by watching parents who put in immense amounts of effort to succeed. Tanya was active, as a teen, in conservative political causes and was a licensed real estate agent, managing her own condominium project by the time she was 18.

I worked as a park ranger and silviculture forester in British Columbia, and then co-authored a Fraser Institute study on the undue influence that grizzly bear researchers and allied environmental groups had over Canadian national parks policy. I then moved on to spend almost 15 years in the energy industry, researching and promoting the value of low-cost and reliable energy to human health, wealth and well-being.

Relocating from Alberta, to Arizona, to Michigan did not deter our focus on the education of our three children — Ceanna, Ewan, and Fionbarr. Tanya stayed home to ensure they had a classical and individualized education they could not receive in government schools.

In 2016, we moved from Arizona to Michigan, where I took on the role of director of environmental policy at the Mackinac Center. Tanya has continued to homeschool and to run her graphic design business, and she recently also became the leader of the Midland Chapter leader of America’s Future Foundation.

We are pleased to see our children growing and beginning to live out these same ideas. Ceanna is a sophomore and George Washington Fellow at Hillsdale College. Ewan is a high school senior, actively involved in his debate league and as a student captain in his church youth group, and he looks forward to working in environmental policy. Fionbarr is a high school sophomore, active in both high school debate and the First Robotics Competition.

Preparing for life has served as a focal point for the Hayes family as we raised three kids, moved throughout North America, and worked to promote human flourishing through healthy environments and viable free markets wherever we have landed.