Someone Has to be a Catalyst 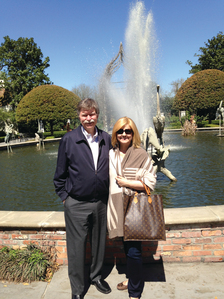 As Linda Ulrey recalls her early years, she sees people who didn’t follow the usual path. Perhaps that’s one reason why she believes that the upcoming generation will improve upon the legacy she received as a child.

“I was raised by an empowered mother and a father who never believed his three daughters were ordinary,” she says. “This was progressive thinking for people who raised their family in the 50s and 60s.”

She enrolled in Michigan State University, hoping to become an economics teacher, but following her mother’s prompting, took a management internship at Chrysler. In time, she managed the Viper plant in Detroit, which she singles out for its product and work environment. “The union workforce and management team both loved the ethos of the product they were making — a vehicle to rival anything on the road.” She credits that for minimizing the discord often found in a factory. Today, Ulrey is retired but active, living in the Bloomfield Hills home she built with her husband over 20 years ago.

Her first encounter with the Mackinac Center came in a doctor’s waiting room, more than 10 years ago, when she found a copy of IMPACT. The long wait, she says, allowed her to read the magazine from cover to cover. “It was an easy read on complex issues.”

When asked to identify the most pressing policy issues of the day, she draws a distinction between local and national concerns. National concerns, she says, can be extremely daunting, hard to understand and even more difficult to do anything about.

Local government, on the other hand, offers more opportunities for people to make a difference. “Local government offices,” she says, “are down the street from our homes. Its elected officials are our neighbors; our children go to school together.”

She calls on officials and citizens alike to listen to each other. “If you want good government, you need the backbone of good ideas and participation from the entire community. I remember my mother telling me to listen to my critics; consider the possibility that they are right.”

“Philanthropy supports efforts that may be too unpopular or controversial to gain the widespread support of the general public or the government. Someone has to be a catalyst to begin these efforts — for me, that is the Mackinac Center.”

Criminal justice, an issue the Center has been active in over the last few years, is one of her concerns. “I have been personally moved by stories of families affected by our criminal justice system,” she says, adding that her opinions have changed. “I used to believe in a very hard line regarding positions on crime and incarceration.” Now, she believes that policy must acknowledge the costs of overcriminalization. “Too many people are locked up for too long, at too high a cost for reasons that cannot be justified in a fair society,” she says. “Everyone must believe that they have a chance for redemption and fairness. The Mackinac Center is at the forefront of leading this discussion on crime, criminal justice and democracy in Michigan.”

When it comes to today’s young adults, she is optimistic. They have used new technologies to create unique and novel ways to give. Parents, of course, still play an essential role: “Parents also need to emphasize giving with their kids as an important part of their values. The more giving becomes part of kid’s habits, the more it continues into adulthood.”