Equipping Families to Choose Among Schools 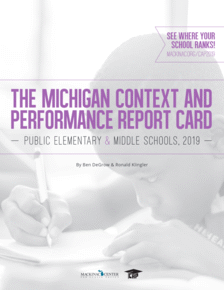 The distance of a short drive can make a world of difference in how much a child learns.

Two conventional public schools, Maples Elementary in Dearborn and Henderson Academy in Detroit, are just over two miles apart. Both schools are about the same size, with more than 90% of their students coming from low-income families.

But Maples and Henderson landed at polar opposite ends of the Mackinac Center’s new Context and Performance (CAP) Report Card. Among the 2,203 Michigan public elementary and middle schools graded, Maples notched the fourth-best score while Henderson finished fourth from the bottom.

The Mackinac Center’s report card helps to bring a sharp contrast such as this one into focus. Factoring in the strong relationship between higher student poverty rates and a school’s lower achievement, the report card compares multiple years of state test scores to the results demographics would predict. This allows a school like Maples, along with several others from its district, to shine. Five of the top 10 scores this year went to schools in the Dearborn district.

The fourth edition of our elementary and middle school report card ranks schools not just on the most recent four years; it also has a long-term measurement that covers performance over the past decade, and another of how a school’s performance has changed over time. Only one school finished in the top 1% of all three categories: Rankin Elementary in Swartz Creek.

For the second straight time, though, the number one school in Michigan is Hamtramck Academy, a National Heritage Academies charter that made the cover of IMPACT in 2018. Three other Hamtramck charters stood tall, as well — Hanley International Academy (#12), Bridge Academy Elementary (#16), and the most improved school in the state, Caniff Liberty Academy.

Even more than in previous report cards, charter public schools were overrepresented among the best performers. They made up 12% of all the schools rated, but 22% of those that received an A. Most of these 49 top-notch charters are located in Metro Detroit, but they can also be found in places like Flint, Holland and Sault Ste. Marie. Charters, on average, give students more opportunity to learn and achieve. Not all are great, but public demand can be great for those that are.

By providing an apples-to-apples comparison, the CAP Report Card helps families understand their options among public schools. Their range of choices could expand sometime after the U.S. Supreme Court rules, likely in June, on a case it heard earlier this year. The decision in Montana v. Espinoza could lead to an end to Michigan’s exceptionally restrictive constitutional provision that will have kept universal choice out of reach for a full 50 years, as of November.

Advocates of educational choice still would need to do the hard work of prodding lawmakers into establishing a program to help all families educate their children wherever they wish, regardless of economic barriers. If they succeed, they will need even more tools like the CAP Report Card to sort through the available options.