Charter School Provides Help Where Other Schools Could Not 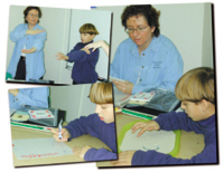 When it comes to students with special learning needs, frustration is an emotion often felt by both child and parent.

Instructional assistant Lynda Howe also understands frustration. "If you haven't lived in a dyslexic family, then you can't understand," she says.

So where do these students go for help? Parents of children with special learning needs have often been relegated to the local public school. But that seems to be changing with the creation of more and more charter schools in Michigan.

In the early stages of the charter school movement, most academies were not designed specifically to serve students with special learning needs. But for the Jorgensen and Howe families, it was the Crossroads Charter Academy in Big Rapids where they finally found their children's needs being met.

Andrew "A.J." Jorgensen was part of the inaugural class at Crossroads last year and is now in the fourth grade. After A.J. struggled through first and second grade in a parochial school, the Jorgensens decided to place him in a third-grade "resource room" at the local public school.

"But by the end of the year, the school told me he had made very few gains," recalls Diana Jorgensen. "I was really upset, to say the least. So when I came here to Crossroads, I was pretty distraught. I felt like I had run out of options for my child."

Dr. Ormand Hook, principal of Crossroads, was a bit concerned that his school would not be able to meet the needs of A.J. However, after discussing what his school could offer, the Jorgensens decided to enroll their son in the third grade again for the 1998-99 school year.

"Dr. Hook worked with us and helped us make the best decision for A.J.," Mrs. Jorgensen says. And with lots of hard work including summers, A.J. is now steadily improving his reading skills.

"He's making A's and B's," Diana says. "And it's not because they [his teachers] are doing it for him. He is doing all the work and, most importantly, he understands what he's learned."

Much of the credit is given to Lynda Howe, who in addition to being an instructional assistant also has two daughters at Crossroads.

Lynda homeschooled her daughters for seven years before putting them into a traditional public school for two years. The girls are now in the sixth and ninth grades at Crossroads.

"My oldest daughter could not learn how to read," Lynda says. "We worked on it year after year, and I knew I had a good curriculum. I successfully taught other subjects for a long time." Finally, Lynda was able to get some help for her eldest daughter.

"We had her tested and they did everything except say the word 'dyslexia.' It was a world I had never seen before. But from that moment on, I sought to receive all of the training I could possibly receive."

At that point, the Howes decided to enroll their daughters in the local public school to get the help they needed, but her daughter's difficulties continued.

After pulling their oldest daughter out of school for the last month of the school year, the Howes had to decide what to do for the coming school year.

"That was when Crossroads opened up," Lynda recalls. She remembers telling the new school, "If your heart is for learning disabled kids, we're here and I'm on board. But if that's not where your heart is, then I'll teach my kids at home."

Lynda was "extremely impressed" by Crossroads's commitment to students with special learning needs and not only enrolled her daughters, but also joined the staff.

According to Lynda, A.J. has continued to improve his reading skills through countless hours of hard work and parental support.

"He's still working at it," Diana Jorgensen says. "He probably won't be up to level for some time, but I see that he's gaining. I can see a progress."