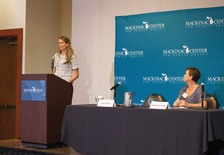 Success is more likely when different sides work together. That’s one takeaway from September’s Michigan Safety and Justice Roundtable, which was held in Detroit. The two-day event was hosted by the Mackinac Center, as well as the Michigan League for Public Policy, the Michigan Committee on Juvenile Justice and the Hudson-Webber Foundation.

The roundtable’s participants came from across the political spectrum to discuss solutions to some key issues in criminal justice. Participants included lawmakers, educators, attorneys, law enforcement officials, advocates and policy experts. Kahryn Riley, director of criminal justice reform at the Mackinac Center, spoke at the event, which addressed many issues she has tackled, including occupational licensing and cash bail.

To what lengths would you go to save your home from being taken by the government? For some people, it means going all the way to the United States Supreme Court.

Nearly 40 supporters and students attended a private screening of the film “Little Pink House,” held by the Mackinac Center at Hillsdale College. The compelling film, based on the life of Susette Kelo, tells the story of how far a nurse from Connecticut was willing to go to save her home from eminent domain.

When a pharmaceutical company decided to build a plant, the city gave the New London Development Corporation the power of eminent domain. This allowed the NLDC to take privately owned land from homeowners to give it to be used for private development.

The U.S. Supreme Court’s decision in Kelo v. City of New London was one of its most controversial rulings. The court ruled against Kelo and her neighbors, ultimately forcing them to give up their property.

Patrick Wright, vice president for legal affairs at the Mackinac Center, spoke after the movie screening and answered questions from the audience.

“The court ruled under the Fifth Amendment that economic development can be considered a ‘public use’ in the eyes of the law,” said Wright. “It’s important to note that while Susette Kelo may have lost the case, she won in the court of public opinion. As evident by the film, her story to fight for her property continues to impact the public to this day.”

Mackinac welcomed Ajit Pai to Lansing in September. Pai, chairman of the Federal Communications Commission, talked with Jarrett Skorup, director of marketing and communications at the Center, for a breakfast Q&A.

While most regulators advocate for a stronger government presence, Pai has taken a different approach. His belief in a “free and open internet” helps guide his decisions. His talk emphasized how he favors free-market competition and has worked to limit the bureaucracy and heavy regulation that has been a legacy of the FCC.

The most high-profile issue Pai has tackled to date is the Open Internet Order, commonly referred to as net neutrality. When asked why the FCC got rid of it, Pai said that the prior regulations were holding back investment and innovation in networks.

Pai also talked about robocalls (the No. 1 source of consumer complaints to the FCC), the telecommunications standard 5G and the expansion of the internet to rural communities.

The Mackinac Center was pleased to once again partner with the ACLU of Michigan at September’s Issues and Ideas forum. Kahryn Riley was joined by Heather Garretson from the ACLU of Michigan to discuss how improving Michigan’s current practice of bail will benefit defendants and taxpayers.

Both Garretson and Riley presented their latest research to an audience of legislators, staffers and others interested in criminal justice reform. The research emphasized the importance of preserving a safe and civil society by making bail affordable for defendants. Reforms may not be too far away. A few weeks after the event, a package of bills was introduced in the Michigan House to implement some of the recommended reforms. ¬ 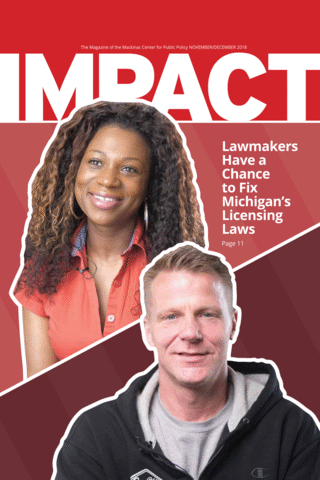