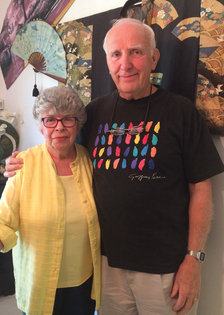 Arlene and Bill Williams are an ordinary American couple. This, of course, is not how I would describe them. Native to Michigan, Arlene and Bill have experienced the ups and downs of the Michigan economy. But their love for this state and their vision of its possibilities remain strong.

Before retiring, Arlene worked as a teacher for 30 years, and Bill worked as an engineer at GM. Because of their occupation, Arlene and Bill had frequent encounters with labor unions. While they both witnessed the benefits unions provided, they also saw their greed. Over time, through firsthand encounters with union overreach, Arlene and Bill began to evolve in their political thinking.

Arlene and Bill were both raised in the homes of Democrats and because of this, free-market principles were a distant thought. They were not involved with politics and instead focused their attention on their careers and families. It wasn’t until later in life that Bill began to realize that the American political party system was riddled with hypocrisy. They were no longer attracted to what Democrats and Republicans had to offer. As Bill put it, both parties are “always happy to give without taking into account the consequences it might have on society.” This reality check forced Bill and Arlene to increase their involvement with the world of politics in hopes of finding a better solution than what the two parties were offering.

Arlene and Bill began to involve themselves more with the political arena and were exposed to free-market ideas and policies as a result. They were immediately attracted to policies like right-to-work because they offered a direct solution to the greed they saw in unions, unlike the policies offered by career politicians of both parties. Impressed with the freedom right-to-work gave employees, Bill and Arlene became avid supporters of liberty-friendly policies. In the words of Arlene, free-market policies “just work.”

Both Arlene and Bill say that our work toward establishing right-to-work in Michigan is their favorite Mackinac Center victory by far. While they believe that unions do some good, they also believe that choice is a fundamental human right that fosters accountability.

Arlene and Bill Williams currently reside in the greater Flint area with their two dogs.