Font size:
The savings to Michigan taxpayers from ending the prevailing wage law were estimated in 1995 to equal five percent of the revenues raised from the state's individual income tax.

What are prevailing wages? The short answer is that in many jurisdictions, including the federal government, prevailing wages are typically wages set at or near the union-scale level. Prevailing wage laws, then, force contractors on government construction or other projects to pay their employees at the same rate as unionized members of the relevant occupation—whether it be bricklayers, carpenters, electricians, or other categories of workers—even if non-union contractors could perform the same work less expensively by paying their workers lower but mutually agreed-upon wages.

In December 1994, a federal district court judge ruled that Michigan's prevailing wage law was preempted by ERISA, a federal pension law. Consequently, the state law was not enforced between 1994 and 1997. A subsequent appellate court decision reinstated the law in June 1997, making it possible to analyze the effects on the economy of both the law and its temporary repeal.

This study examined the performance of Michigan's economy in the 30 months that the prevailing wage statute was suspended and the 30 months prior to the district court's nullification of the law to determine the following:

Prevailing wage laws are poor economics and poor policy. They restrict people from operating in a free market to allocate resources and use factors of production most efficiently, thus retarding job creation and contributing to lower economic growth. As a result, people have been moving out of Michigan and other prevailing wage states, preferring to earn money in environments where their rate of pay is determined by their individual skills and worth, not by a governmentally determined "just wage" that bears little resemblance to economic reality.

Michigan's prevailing wage law was enacted over 30 years ago to deal with economic conditions that simply do not apply in the modern global economy. The preponderance of the evidence suggests that the Michigan legislature would be wise to repeal the Prevailing Wage Act of 1965. 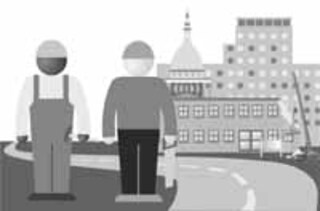