State Government Up to Its Eyeballs in Pension Debt 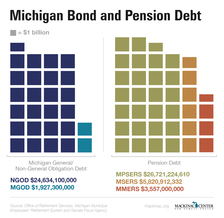 Unlike Washington D.C., Michigan’s state government is constitutionally prohibited from spending more than it takes in each year and borrowing to make up the difference. Yet state taxpayers are still liable for large amounts of state debt, for purposes both practical and problematic.

The debts of greatest concern to residents are general obligation bonds, backed by general taxpayer dollars. Payments come right out of the annual general fund tax revenue the state uses to support the rest of what it does.

There is other debt that gets paid by taxpayer dollars without being general obligation debt. Some $3.1 billion borrowed to build or improve state offices and college buildings is also of concern because it will take another $247 million from the new budget — more money that won’t be available for other uses.

But other portions of the state’s $26.6 billion official debt are less of a concern to taxpayers. The Michigan State Housing Development Authority, for instance, borrowed $2.0 billion and then lent it in turn to housing developers. Taxpayers will not be liable as long as developers make their payments.

That level of debt is worrisome, but it is the semi-off-the-books debt that poses the major threat to taxpayers, not only in Michigan but all around the country — and pensions are exhibit No. 1.

Michigan state and local governments have promised their employees far more in pension benefits than can be supported by the amount set aside for that purpose. There may be no official mortgage or bond offering for this debt, but every taxpayer is on the hook for it nonetheless.

The state-run school pension system is largest pension system in Michigan. Lawmakers have promised teachers and school employees $67.7 billion in pension benefits, but set aside and invested only enough to cover $41.0 billion. Taxpayers carry the burden for the $26.7 billion difference, and it is a heavy lift: $2 billion of the amount paid in state and local school taxes goes to fill this hole.

And even these numbers are less firm than they appear. The underfunding came about two ways. As auditors have noted, state officials and lawmakers made overly optimistic assumptions about future returns from pension fund investments and payroll gains. The actual debt owed to retirees in this system may actually be higher than $26.7 billion.

And then, even after basing annual pension contribution amounts on imprudent predictions, officials still haven’t made full payments.

Moreover, the pension figures ignore billions of quasi-liabilities represented by health insurance benefits that have been promised to school and government retirees. Unlike its treatment of pensions, Michigan’s constitution does not prohibit trimming those insurance benefits, or even eliminating them altogether.

Because the pension underfunding has gone on for decades, more money is owed to government employees and retirees than any other class of creditor. That is a bad situation for those workers and for taxpayers alike. To prevent the problem from getting worse, governments should stop providing pension benefits that can and have been underfunded and instead offer employees defined contribution benefits.

How the Pandemic Will Affect Public Sector Pension Plans