Shared time is an agreement between a private school and a public school district that allows private school students (at no charge to them) in grades kindergarten through 12 to take noncore classes (e.g., foreign languages, physical education, fine arts, computer science) that are taught by teachers employed by the public school district.[13] School districts then get to count these part-time students towards their total enrollment for the purpose of collecting state aid for providing such services.

Survey data was retrieved from 208 private schools (66 percent of survey sample) and 70 percent of these schools said that they enroll at least some students in shared-time programs. Moreover, of those private schools using shared time, 80 percent enroll 71 percent or more of their students in these programs. When broken down at school level, for those that have shared-time programs, the average participation rate is 60 percent for private elementary and middle schools and 36 percent for private high schools. 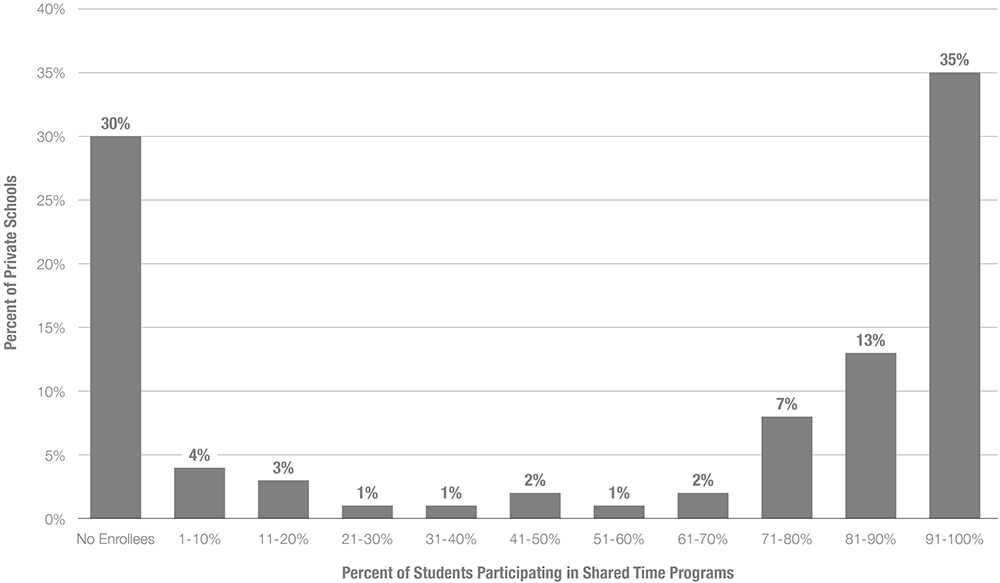 In 2012, the Michigan Legislature made changes to the Post-Secondary Enrollment Options Act, which allows for private school students to “dual enroll” in a state-funded, college-level course without having to first enroll as a part-time public school student.[14] Additionally, the law allows private schools students to take college courses that count for credits towards both a college degree and a high school diploma.[*] 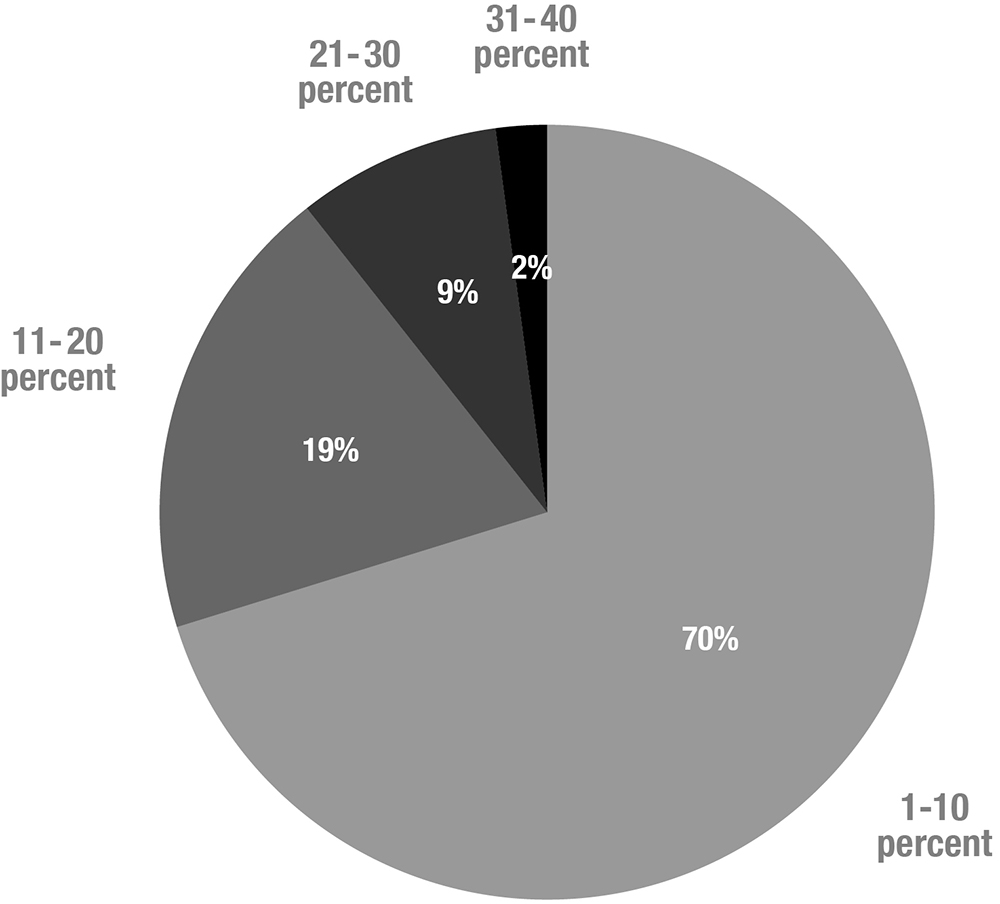 All private schools can elect, but are not required, to administer state assessments to their students during the testing period as prescribed by the Michigan Department of Education.[15] Approximately 80 percent of private school respondents indicated that they measure student academic performance annually for third through eighth graders using a norm-referenced assessment.[†] At the high school level, just over one half of schools annually assess ninth, tenth, and eleventh graders and fewer than one in three high schools administer an annual, norm-referenced assessment to their twelfth grade students. Graphic 13 provides a breakdown of private school student assessment by grade. 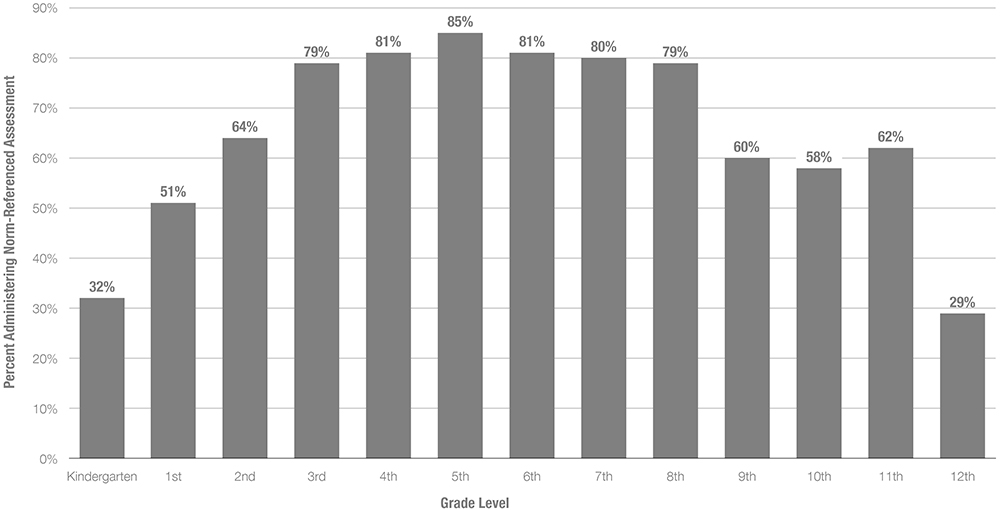 While annually assessing their students, very few private schools utilize Michigan’s state assessment (i.e., M-STEP for 2015-16).[‡] As shown in Graphic 14, over three-quarters of survey respondent private schools indicated that none of their students take the state standardized assessment. The most common norm-referenced tests taken by private school students include the Iowa Test of Basic Skills, NWEA Measurement of Academic Performance, and, at the middle and high school levels, both the ACT and SAT suite of tests (e.g., ACT Aspire, Plan, Explore and ACT, or the PSAT and SAT).

Graphic 14: Percent of Private School Respondents Who Administer the M-STEP 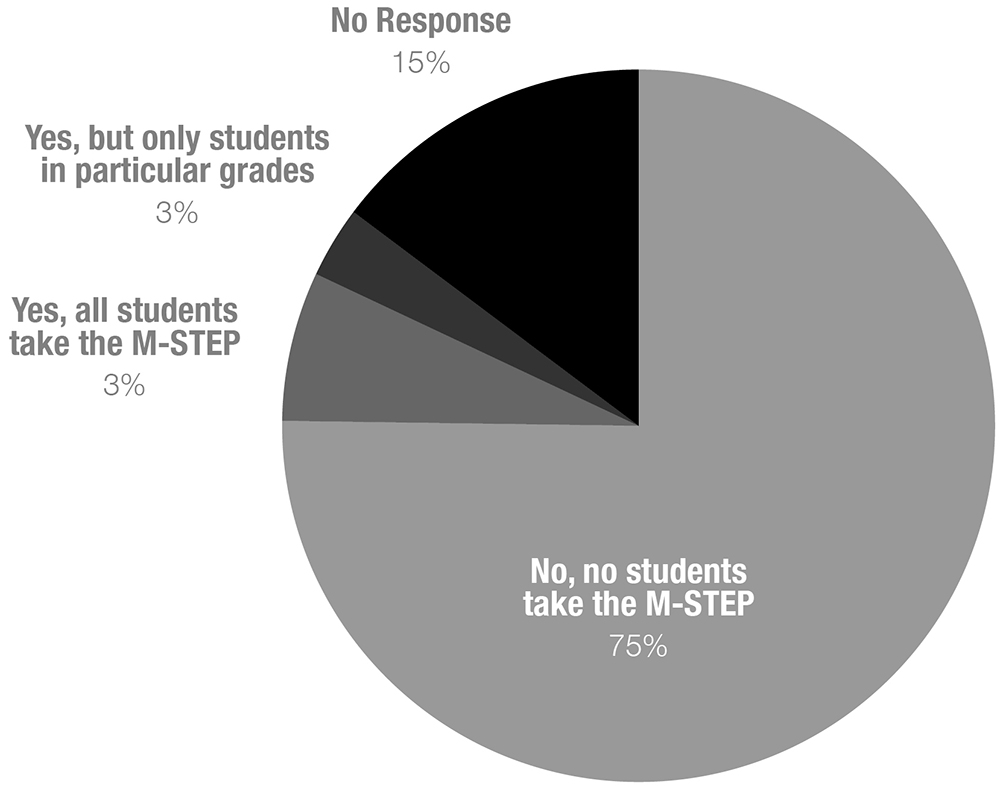 MNSAA is recognized by the College Board as an accreditation agency. In order to begin the MNSAA accreditation process, a school must have (a) been operating for at least three years; (b) developed a strategic plan for school improvement; and (c) been evaluated by an external group of public and private educators.[17]

Additionally, a school must demonstrate its compliance with state law and regulations. After having been accredited, schools must be re-evaluated every five or seven years.

The second most popular accreditation agency is the National Lutheran School Accreditation. To be NLSA accredited, a school must undergo an evidence-based evaluation (i.e., ratings are established based on evidence and practices that are in place at the time of the accreditation self-study).[18] 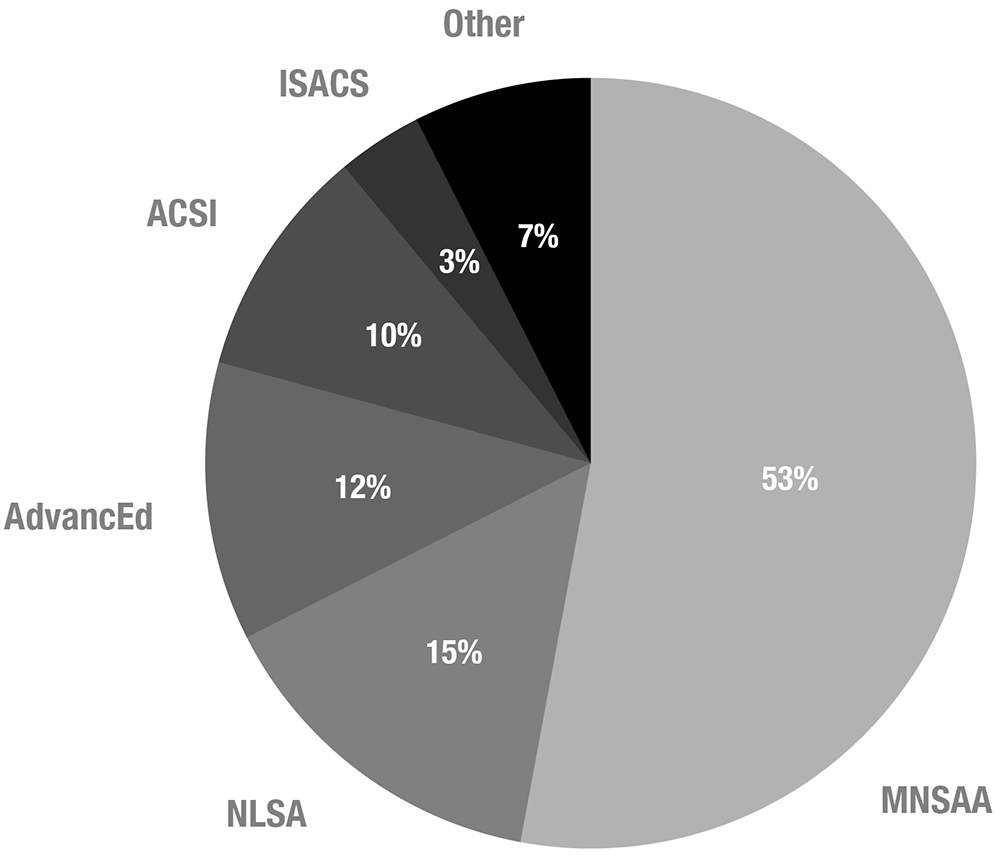 [‡]This could be due to the fact that the M-STEP is a relatively new test, having been administered for the first time in April of 2015. It may be that some private schools plan to administer the test, but are going to wait until they can further review it and the procedure for participating in the test. “M-STEP Summative” (Michigan Department of Education, 2016), https://perma.cc/C2M6-9NHF. 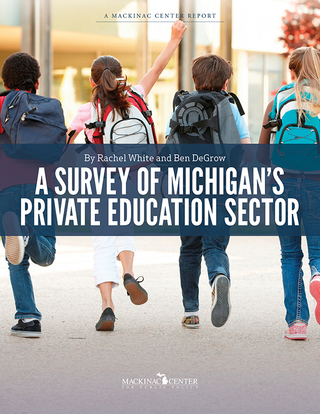