Just look at the evidence 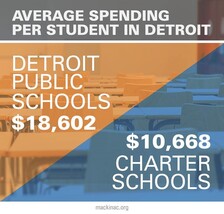 The best research on school choice in Detroit shows that it leads to better results at a much lower cost to taxpayers. As Mackinac Center’s Director of Education Policy Ben DeGrow writes in The Detroit News:

The study found that charters did better than conventional public schools in 52 of the 56 different outcomes tested and that Detroit charters gave students an extra two to three months of learning each year. The study called Detroit charters a “model” for other cities.

Meanwhile, on every test since 2009, Detroit’s traditional public school students scored the worst in the nation among big cities on the nation’s report card.

Much of the Detroit establishment — politicians, interest groups, and unions — want to give the mayor the ability to name members to a Detroit Education Commission that would restrict school choice in the city. The State Senate has given in, and included a $700 million bailout. But the State House has resisted and stood up for taxpayers and Detroit parents, who are saving money and receiving better education opportunities.