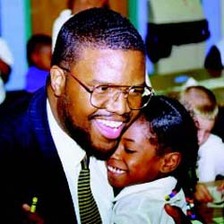 Tony Moore left his job as a successful principal in a traditional public school because of greater freedom and accountability in charter public schools.

In 1998, Mr. Anthony Moore, a 13-year veteran public school teacher and administrator, decided to leave the Kansas City, Kansas Public Schools to lead the Mid-Michigan Public School Academy in Lansing. This is the largest charter school in Michigan, serving 1,200 K-8 students and run by The Edison Project, the nation's leading private manager of public school district partnerships and charter schools.

"At first I was reluctant to leave," admits Moore. "I had it pretty good where I was." But the opportunity to come to Michigan ended up being too good to turn down. Moore, who earned a Distinguished Educator award in 1998, found himself highly impressed with the direction of The Edison Project.

"My educational philosophy of serving the student first fit very well with the Edison approach to educating a child," says Moore. "I believe that every child can succeed, regardless of their situation."

Moore's experience backs up that view. In 1988, he was appointed principal of Parker Elementary, the worst performing elementary school in the Kansas City school district. In the 20 years prior to his arrival, Parker was unable to retain a principal for longer than two consecutive years. Within five years, Moore and his teachers moved Parker from last place to sixth in reading gains out of 35 schools in the district on the state assessment. Parker students made the second-highest math gains in the entire district during the same period.

But Moore believes his success will always be the exception rather than the rule under the current system of public schooling. He says his achievements at Parker were not because of the system, but in spite of it. He sees the charter school movement as the opportunity for more Parker-like successes.

At Parker, Moore says, he "had control of a very small amount of the budgetonly about one percent. In the charter school, I am responsible for 100 percent of the budget."

This places the responsibility for success in the hands of those doing the actual work of the school, which is right where Moore wants it. "You can't hold me accountable," he says, "if you don't give me control of developing and managing the budget or if I don't have control of the hiring and terminating process of teachers and staff."

Now Moore functions as both the principal and superintendent. "I am responsible for transportation, food service, hiring and firing personnel, evaluating staff, ordering materials, and much more. As a public-school principal I never could write policy. I was only told to enforce the policies established by the central administration and the board of education."

When asked if that is too much pressure for one person to handle, Moore quickly responds that this was the opportunity he always wanted as a principal.

"It is not a negative for me," he says. "It can only be so if I don't do a good job. The way I look at is, if you are going to hold me accountable, you need to give me the resources and autonomy to make things happen."

The freedom and flexibility afforded administrators in charter schools may also be what draws teachers like Christina Hilyard, a kindergarten teacher at Mid-Michigan Public School Academy.

After teaching first and second grades in the Clare public schools for 3 years, Hilyard decide to find work in Lansing instead of making a daily three-hour round trip commute to Clare.

"At first, I was unsure about charter schools," she admits. "Even the community doesn't seem to fully understand charter schools. But everything that happens in my classroom now was happening at my other school."

So what is the difference?

And what about the lack of unions and tenure for teachers in charter schools?

"The union came in and tried to organize the teachers here just four months after I came to Mid-Michigan," remembers Hilyard. Because of her experience in a traditional public school where teachers have to pay dues or agency fees as a condition of employment, Hilyard thought unions were necessary to protect the interests of teachers. But now, "I don't feel like I need the union."

As for tenure, "I am confident in my ability as a teacher, so I don't need it," she says. "I believe that if you do your job, and seek assistance in the areas where you struggle, then you don't need to worry."

Moore and Hilyard recognize the opportunity for increased teacher pay as an important factor in attracting and retaining high-performing teachers. First-year teachers at Mid-Michigan can earn seven percent more than their traditional public-school counterparts in the Lansing School District.

"While there are limits, we are able to negotiate our salaries," says Hilyard. "We can go in and say, 'These are the things I've accomplished and this is what I think I deserve in compensation.' It wasn't like that in my first school. But here, pay is based on how you perform, not on how many years you've been around."