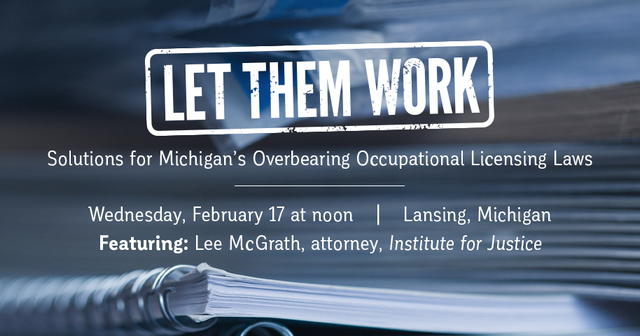 Michigan Can Do More On Occupational Licensing

Free event in Lansing next month

In 2015, four states totally deregulated African-style hair braiders. The Institute for Justice, a public interest law firm, notes that this style of braiding uses no chemicals and is extremely safe. But according to a 2014 IJ report, more than 20 states still require braiders to get thousands of hours of training and purchase a state license. Fortunately, Michigan does not require braiders to take extra classes or pay fees, and as such, is one of 10 states to which IJ gives an A rating.

But the Great Lakes State is still fairly heavily regulated when it comes to occupational licensing. If this issue interests you, the Mackinac Center will be hosting a free event (with lunch included) in Lansing on Wed., Feb. 17, entitled, “Let Them Work: Solutions for Michigan’s Overbearing Occupational Licensing Laws.” Here’s the synopsis:

Occupational licensing is now one of the largest issues in labor economics, perhaps even surpassing unionization and the minimum wage. On a national basis, 25 percent of all Americans need the government’s permission and specific credentials before they can work. That is more than twice as many people who are members of unions — 11 percent and declining — and 25 times the number who earn the minimum wage.

The problem of licensing is becoming increasingly apparent and it is being addressed in a bipartisan fashion. The U.S. Supreme Court and President Obama’s Council of Economic Advisers issued a landmark opinion in February 2015 and a 77-page study in July 2015, respectively. Both questioned the legality and wisdom of occupational licensure laws.

Lee McGrath is an expert in this field, having litigated and advocated for licensing reform across the nation. His firm, the Institute for Justice, has been a national leader in pushing to reduce barriers to earning an honest living since its founding in 1991. He will discuss the problems with current licensing laws, explain recent court cases on the issue and show how Michigan can lead the way in reforming these harmful regulations.