There is Plenty of Money in the Budget for Roads

It’s all about legislative priorities 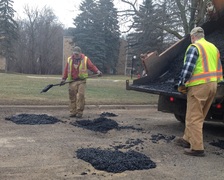 The Michigan state budget is $54.5 billion — so why can’t legislators find an extra $1.2 billion or so for road funding?

That’s the question MLive tries to answer in a video. But they buy into a bad argument in their explanation.

Many proponents of raising taxes to increase road funding often say that the total budget number of $54.5 billion is misleading and that lawmakers have “only” about $10 billion to work with. MLive accepts this argument and assumes new spending for roads can only come from this portion of the state budget.

But that is incorrect. While it is true that the state cannot use most federal funds on roads, the rest of the state budget is still $30 billion and much of that could be used for improving transportation infrastructure. Some of this $30 billion is considered “restricted” for certain purposes, but most of these restrictions are statutory — meaning lawmakers could change the law and prioritize this money for roads if they choose.

Further, some of the restricted revenue in the state budget could be used for services currently funded with general fund dollars. For instance, the state spends over $13 billion on education through the School Aid Fund. But it also dedicates another $1.5 billion from the general fund for the same purpose, mostly as aid to public universities. Increasing the amount of money from the SAF spent on higher education would free money in the general fund to be used for roads.

There are also billions of dollars in other money currently earmarked to the SAF that could go to the state’s general fund, like the $2.4 billion coming from the state income tax earmarked by statute. This would require a discussion about education funding, but these funds are within policymakers’ direct control.

Adding these options together shows that there’s more than just $10 billion available for legislators to work with in finding more revenue for roads. And don’t forget that the general fund has increased by about $2.3 billion since 2010, while the total budget (excluding federal funds) has increased by $4.8 billion. There’s likely going to be more revenue available in the future than what is on hand today.

For more specific ideas, we have outlined more than $1.5 billion in savings from programs that offer little benefit to the typical taxpayer. And plans passed by the state House and Senate would take future state revenue and dedicate those funds to transportation first before increasing other government spending. That is money which would require no cuts to current services.

There is much to debate about how to spend taxpayer dollars efficiently. But the total budget being managed by state policymakers is much larger than the $10 billion that MLive acknowledges.