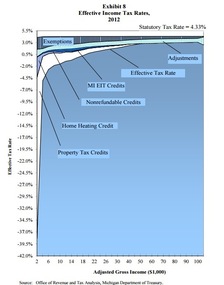 Currently, the Michigan Constitution requires the state to use a flat income tax, where everyone pays the same percentage (4.25) of their income. But some want to scrape this and allow state legislators to set different rates for different people.

A recent poll from EPIC-MRA ostensibly suggests there’s support for a graduated income tax among Michiganders, with 66 percent favoring the concept. At their convention last weekend, Michigan Democrats proposed a constitutional amendment that would enable the Legislature to create a progressive income tax. Over the years, similar bills have been introduced on the issue.

The liberal Eclectablog says that “the domination of the wealthy and the skewed influence of corporations” ensures this won't move through the Legislature. But, it continues, “Republicans and corporatists” fear a voter-led ballot initiative to amend the constitution, because it would “bring Democrats to the polls in droves.” The blog predicts it would be a “game changer” for Democrats.

Perhaps. But it should be noted that changing from a flat tax to a graduated system has been attempted in Michigan three times and has always failed overwhelmingly: In 1968 it got 23 percent support; in 1972 it got 31 percent; in 1976 it got 28 percent. That was a long time ago, but ballot attempts to raise taxes or change from a flat tax in other states have not gone well in recent years. Since these proposed tax changes commonly promise to raise overall state revenue, it’s difficult to determine if voters are rejecting the taxing mechanism or the revenue boost to government.

Even with a flat income tax, Michigan’s tax system is already quite progressive. An analysis from the Michigan Department of Treasury shows that tax exemptions and credits means that the average taxpayer doesn’t actually owe state income taxes until their income exceeds $18,000 (see image nearby). These exemptions and credits also lead to a higher effective tax rate for higher levels of income — mimicking a progressive income tax scheme.

As noted by William McBride, chief economist with the Tax Foundation, the best research shows that higher taxes harm economic growth. He writes:

So what does the academic literature say about the empirical relationship between taxes and economic growth? While there are a variety of methods and data sources, the results consistently point to significant negative effects of taxes on economic growth even after controlling for various other factors such as government spending, business cycle conditions, and monetary policy. In this review of the literature, I find twenty-six such studies going back to 1983, and all but three of those studies, and every study in the last fifteen years, find a negative effect of taxes on growth. Of those studies that distinguish between types of taxes, corporate income taxes are found to be most harmful, followed by personal income taxes, consumption taxes and property taxes.

Michigan legislators should not change the flat tax. And if it ever gets to the ballot, citizens would be wise to reject a progressive income tax once again.