Number of crimes. The Michigan Penal Code, located in chapter 750,[21] and the listing of additional crimes and offenses, located in chapter 752,[22] run to 266,300 words, taking up 500 pages of ten-point, double-spaced Times New Roman text.[23] Its provisions contain a combined 918 sections,[24] though this count does not fully reflect the number of crimes on the books,[25] as many crimes — including 48 percent of felonies and more than 76 percent of misdemeanors — are codified outside the penal code.[26] Overall, Michigan has an estimated 3,102 crimes in its statutes, including 1,209 felonies and 1,893 misdemeanors.[27] Yet many more exist through regulatory “catchall provisions,” which make entire sections of the regulatory code criminal, including the state’s regulations dealing with public health, agriculture, and the environment.[28]

Comparative trends. By comparison, Ohio’s criminal code contains 415 sections,[29] Illinois’s 571,[30] and Wisconsin’s 384.[31] The criminal codes of Michigan’s neighbors demonstrates that having a large number of codified crimes — more than the ordinary citizen could hope to know and understand — is a common, modern trend. Each of these states has increased the scope of its criminal laws far beyond the Model Penal Code, developed in 1962, which contains only 114 sections.[32] Although cross-state comparisons of criminal laws are complicated by the fact that states organize their laws differently — and, in many cases, as in Michigan, not all criminal provisions are located in criminal codes themselves — Michigan appears to have a criminal-law complexity even more pronounced than comparison states.

Intertemporal trends. Not only does Michigan seem to have more crimes on the books than its neighbors; the state has also been adding crimes consistently in recent years. Over the last six years, the state has, on average, added more than 45 crimes annually, 44 percent of which were felonies (see graph below). Seventy-three percent of the new crimes created during this period fell outside the penal code — including 25 crimes in the laws governing natural resources and environmental protection (chapter 324) and 25 crimes in the laws governing trade and commerce (chapter 445).[33] These figures indicate that Michigan’s legislature has been even more aggressive in adding new crimes to its books than the legislature of North Carolina, a state that the Manhattan Institute deemed to be overcriminalized, partly based on North Carolina’s adding of 34 new crimes, on average, annually to its laws.[34] (North Carolina, as mentioned, was the subject of the Manhattan Institute’s first state-overcriminalization analysis.) 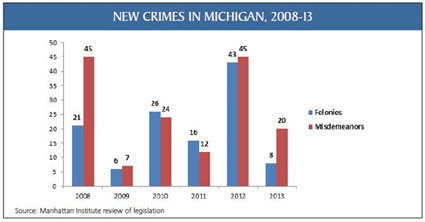 Sentencing. Notwithstanding the broader trend toward increasing the number of criminal offenses, the Michigan legislature has taken recent steps to reassess the state’s sentencing approach — fueled in part by the fact that prisons constitute a greater share of Michigan’s general fund budget than they do in any other state.[35] After launching a Justice Reinvestment Initiative in June 2013, Michigan completed an analysis of data across the criminal-justice system in May 2014.[36] Although the policy changes stemming from this effort are as yet undetermined, other states have undertaken sweeping efforts to reallocate prison populations toward violent offenders — most notably, Michigan’s neighbor Indiana in its 2013 legislative session.[37] 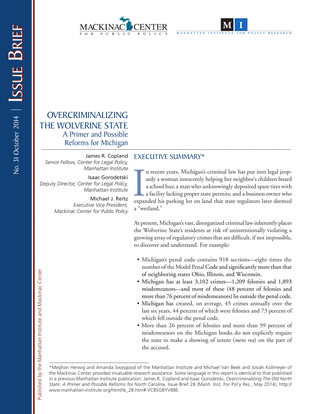