Michigan Capitol Confidential has been reviewing how the state's economy performed during the previous decade, in answer to a question raised by a politician’s recent assertion that “those years weren’t as bad as we think.” Separate articles looked at changes in Michigan’s employment, personal income and loss of people to other states. The data shows the period was quite bad, although causes and culprits will be debated.

But one sector does appear to have experienced significant growth during the 2000s: corporate welfare, euphemistically called “economic development programs” by politicians.

Measuring its growth is challenging because of frequent changes in programs and goals, a lack of transparency, and an abundance of spin and puffery in the information that is released. Moreover, the state has a poor record of actually confirming that subsidy recipients kept their “jobs” and “investments” promises.

The Michigan Economic Growth Authority was considered the state’s flagship economic development program in the 2000s. Launched by Gov. John Engler in 1995. It granted “refundable” tax credits to particular firms selected by political appointees on the entity’s board. (MEGA  was replaced in 2011 by a direct subsidy program, with amounts appropriated annually by the Legislature.)

Companies had to make investments and employ specified numbers of people before they could collect the credits, which were delivered in the form of business tax reductions and flat-out subsidy checks. How much of each has not been revealed to the public, reportedly due to Treasury Department rules.

As the charts below show, the volume of MEGA activity rose sharply under Gov. Granholm, both in the quantity of deals and their size: 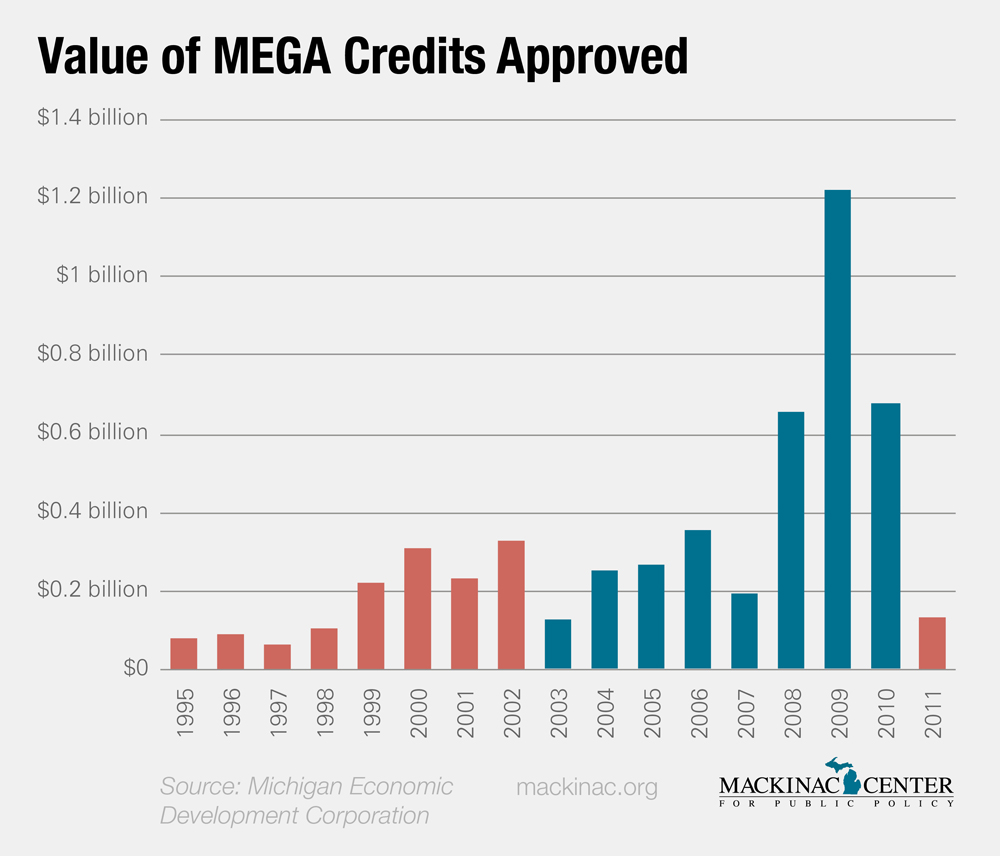 The number of jobs promised by these deals rose apace: 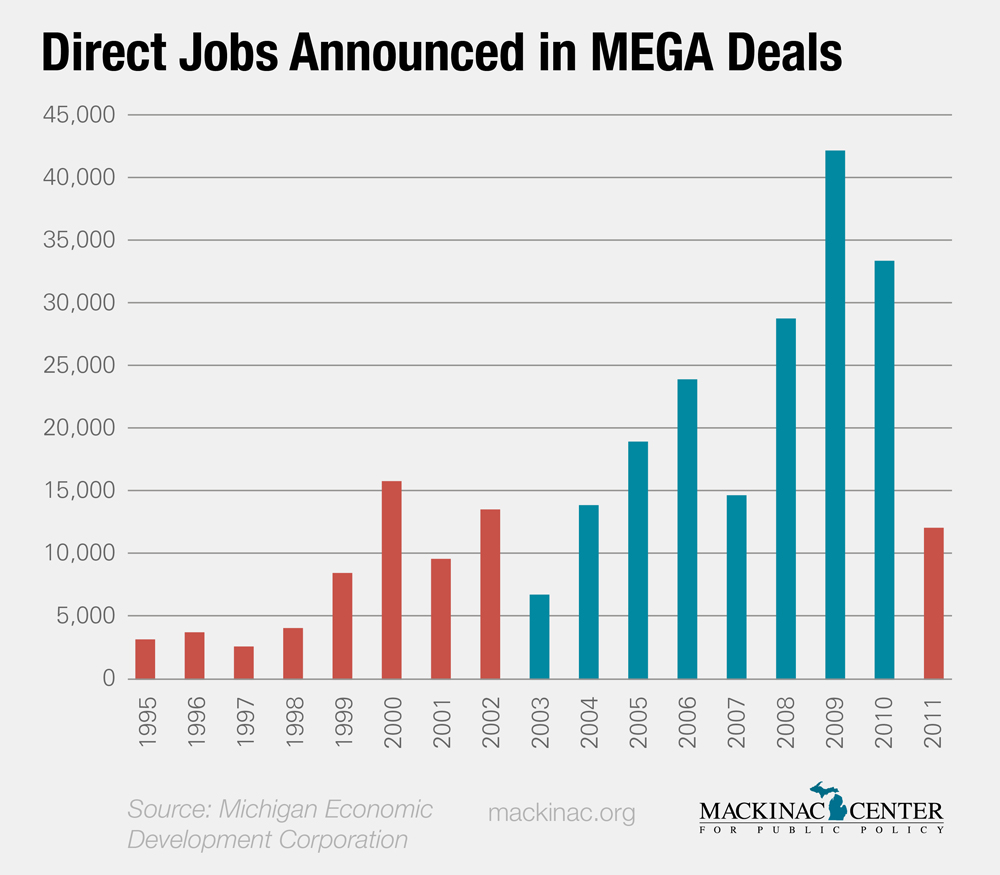 Most of the jobs never happened though. A 2009 Mackinac Center study found that from the program’s 1995 inception through 2004, only 29 percent of the jobs initially promised came to pass. And even when these companies added jobs, considering the costs of these incentives, it’s questionable whether their net economic effects are positive. Moreover, it is impossible to know how many of those jobs would have happened even without the special treatment.

In addition to expanding MEGA, Gov. Granholm also launched her own selective subsidy and tax break programs. One of these was called the 21st Century Jobs Program, an economic central planners’ smorgasbord ranging from business loan guarantees to panels of “experts” allocating state research subsidies to the state actually owning a share of particular businesses. This was approved by the Legislature in 2005 and financed by $400 million in new government debt, with a commitment to spend an additional $75 million annually for another eight years (spending that continues today.)

Like MEGA, the results were not what was promised: A 2013 Auditor General report found that just 19 percent of the original jobs projected came to pass.

A number of other corporate and subsidy programs were launched or expanded by Gov. Granholm. One paid up to 42 percent of the expenses incurred in Michigan by film producers. In 2011 the open-ended nature of these film subsidies was ended, replaced with fixed-sum grants ($25 million worth in the 2011-2012 fiscal year, and $50 million annually in subsequent years.)  As of last spring, nearly $450 million has been spent on these subsidies, with little to show for this massive redistribution of Michigan taxpayer dollars (see chart). 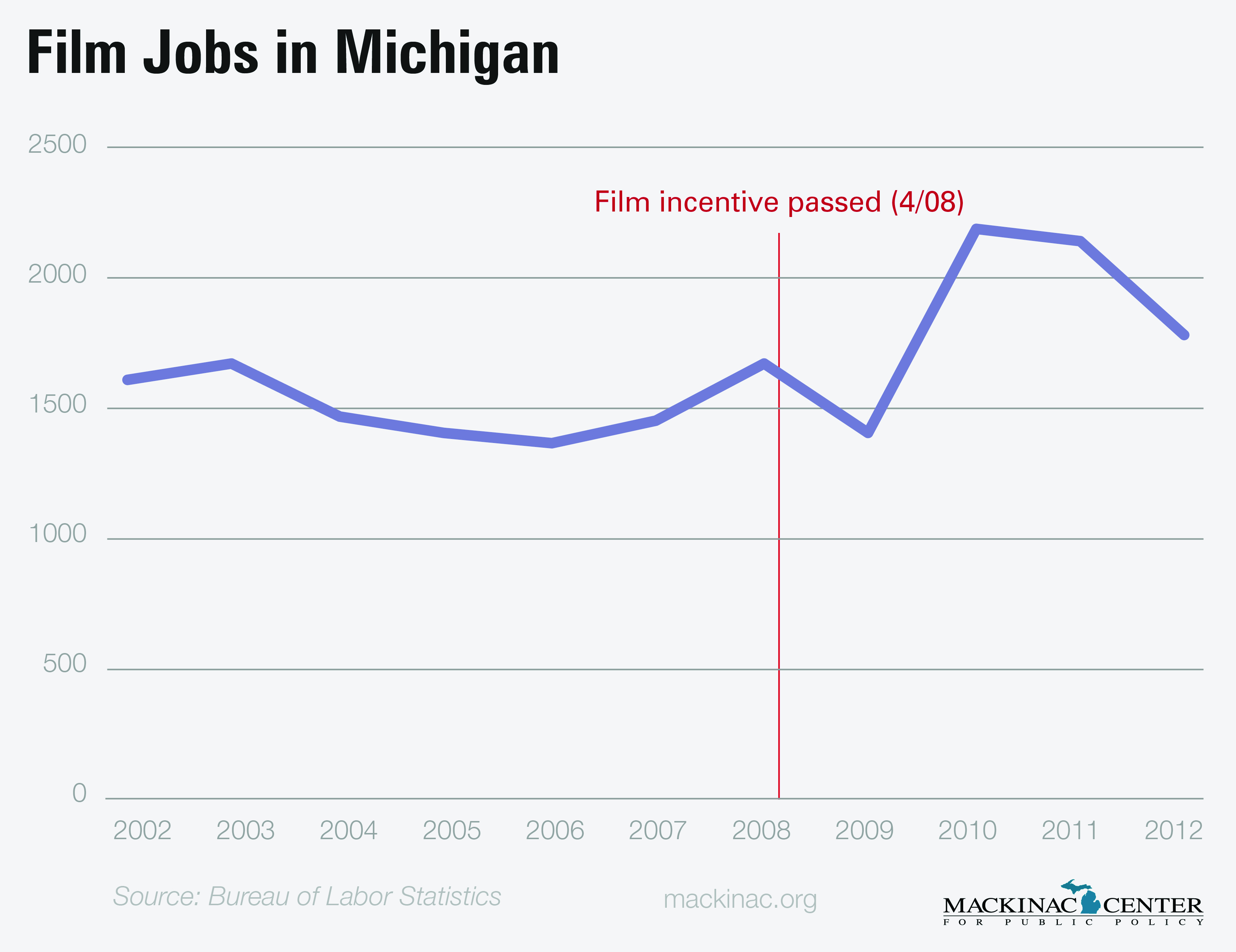 There is no systematic evidence that the corporate welfare expansion did anything to relieve the dismal economic conditions that prevailed during Michigan’s “lost decade.” Indeed, the evidence from many studies shows that these government attempts to pick winners and losers were actually harmful.

It Was 25 Years Ago Today - Michigan's Big Corporate Welfare Experiment

Kmart Property is MEGA Reminder Not to Extend Subsidy Program