Like Crary, John Davis Pierce was also of New England (New Hampshire). Following graduation from Brown University he studied theology at Princeton and was licensed to preach as a Congregational minister. In 1831, Pierce came to Michigan with the American Home Missionary Society where he settled in Marshall. It was there that Pierce and Crary became good friends.

Pierce's influence on Michigan's government education system began with his appointment by Governor Stevens T. Mason in 1836 as the first superintendent of public instruction. Pierce was responsible for implementing measures to fulfill the provisions established in the constitution. Upon acceptance of his commission, Pierce headed to New England to study the eastern school systems and institutions of higher learning. After spending more than two months in New York, Massachusetts, Rhode Island, and Connecticut, the new superintendent returned to Michigan to write the report "which would gain for him everlasting fame as the father of the Michigan public school system," according to historian Floyd Dain.37

Pierce outlined a proposal to the legislature in 1837 that contained six provisions for establishing Michigan's government-financed and operated education system. The first set forth the governmental creation, administration, and support of primary schools; the second called for the creation and funding of public libraries. Schoolhouse construction was detailed in the third, and the fourth suggested the establishment of county academies or branches of the university. The fifth called for the organization and support of the university and the sixth outlined a program for the dispersal of the school lands and the establishment of a permanent school and university fund. In addition to his proposal, Pierce called for a system of tax-supported schools in which no primary-school pupil would be required to pay tuition—this goal, however, was not achieved on a statewide basis until 1869. He also promoted teacher certification by the state, minimum wage pay for teachers, and compulsory attendance laws.38 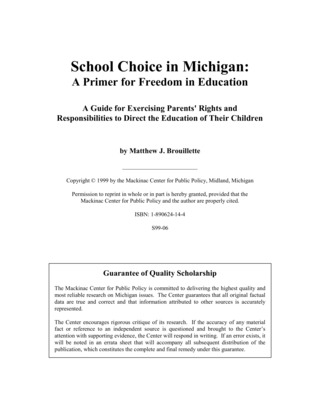