Why we do what we do.

Prior to joining the Mackinac Center for Public Policy, I anchored and reported local television news stories. The job required meeting new people and asking them questions. Over the course of 10 years and interviewing thousands of people, the question that got the best response is “Why?”

When asking heroes who rescue people from dangerous situations, they normally responded, “It’s what anyone would do in that situation.”

When asking police officers, firefighters and EMTs why they chose to go into those fields, most said, “I want to help people.”

When asking teachers why they decided to choose their career path, the general answer reflected an investment in future generations.

We live in a country where we have the right to choose what we want to do for a living. People select these noble professions for many reasons, but whatever the reason, it is entered into voluntarily.

Prior to Michigan becoming a right-to-work state, labor unions forced workers to pay them. Teachers who voted against a contract or disagreed with the union’s ideology, politics or value, had no choice in the matter. Before March 28, 2013, the decision to become a traditional public school teacher was a free choice, but the decision whether to pay a union was not.

Many Michigan teachers have received a rude awakening over the past year. Union officials came after them for dues money. According to Amy Breza, a para-educator at Clarkston Community Schools,
“I had my union president hunt me down in my own classroom.” Amy is one of several teachers who contacted the Mackinac Center when they felt they had nowhere else to go. The Mackinac Center Legal Foundation is litigating on their behalf. The teachers did not know that the union claimed the only time they could exercise their right-to-work freedoms is in the month of August.

August of 2014 will be a different story, as you may have already seen. The Mackinac Center dedicated resources to reaching teachers who were left in the dark regarding their new rights. We’ve sent emails and postcards to teachers letting them know that they now have a choice. Several Michigan media outlets and national outlets picked up on our message and helped push this informational message forward.

You’ve also seen how the MEA has reacted. Rather than trying to persuade teachers to voluntarily stay with the MEA, it has spent a lot of its time trying to attack the Mackinac Center for simply informing teachers of their new rights.

The Mackinac Center received various responses from teachers. We heard from a local union president who did not know about the August opt out period and asked us for help in informing his members of how to properly do it. A veteran local union secretary contacted us because she had never heard of the August opt out period and said she wanted out. Others told us how difficult it is to get proper information regarding the process from the union.

Under a culture of force, these teachers who are asking for information would have no recourse as to paying a private organization or face getting fired. When asked why they pay the MEA, their honest response would be, “Because I have to.”

Under a culture of freedom, all teachers are allowed to voluntarily give the MEA money or choose to keep roughly $1,000 a year to do with it as they please. Their response to “Why?” can honestly be, “Because I want to.”

Freedom is better than force.

This is why we do what we do. 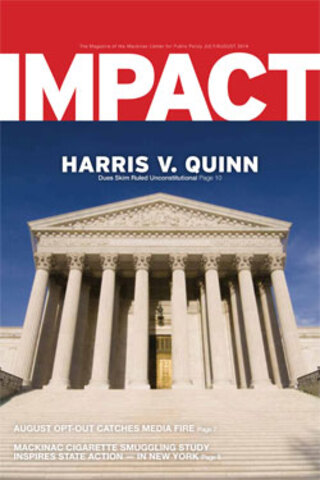